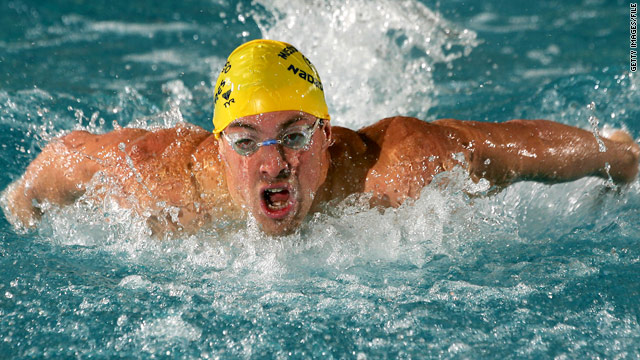 (CNN) -- Fran Crippen, a star open-water swimmer, was at a competition in the United Arab Emirates when he made a promise to his longtime prep-school coach back in the states.

He would call by 5 a.m. Saturday with the outcome and details of the 10-kilometer Marathon Swimming World Cup.

Richard Shoulberg, who began coaching Crippen when he was 7 years old, knew something was wrong when the athlete had not called by 5:45 a.m. ET, he told CNN.

Indeed, in the UAE, divers were searching for Crippen after he did not finish the race. They found his body two hours later.

The loss of Crippen, 26, hit hard in suburban Philadelphia, where he grew up in a family of swimmers who trained and began competing there. Crippen was on target to achieve his goal of being an Olympian -- a dream cut short.

"We're all grieving. We're all in shock," Shoulberg said.

Earlier, however, the head of the water sports club in Fujairah, Ahmed Ibrahim, said that preliminary tests showed that he suffered a heart attack.

"We do not know," Shoulberg said about the cause of death, adding that Crippen was "fit as a fiddle."

Crippen died Saturday during the last leg of the Marathon Swimming World Cup in Fujairah, the International Swimming Federation (FINA) said in a news release.

The cause of death is under investigation, FINA said.

The high temperatures have led to some speculation that it may have contributed to the death.

However, Al Hamour denied any reports that Crippen's death may have been caused by water temperature or cleanliness.

Swimming World magazine reported that Crippen fell unconscious during the event and was found by deep-sea divers two hours later near the race's final buoy.

Crippen won bronze in the 10-kilometer event at the 2009 FINA World Championships and was the gold medalist in the same event at the 2007 Pan American games, according to USA Swimming.

Crippen, of Conshohocken, Pennsylvania, was inspired to take up swimming at age 6 after watching older sister Maddy Crippen compete in the water.

Maddy Crippen was a member of the 2000 U.S. Olympic team, according to USA Swimming.

Crippen graduated in 2006 from the University of Virginia where he was twice named Atlantic Coast Conference Swimmer of the Year.

He was to be inducted into the athletic hall of fame of his former prep school, the Germantown Academy next month. Instead, he is being remembered as a dedicated swimmer who gave his time to teaching young children how to swim, and introducing high school swimmers to open-water swimming.

"He was an unselfish human being," Shoulberg said.

Crippen's body will be handed over to U.S. Swimming Federation authorities on Monday. Shoulberg said he hoped his body would be brought home within 48 to 72 hours.