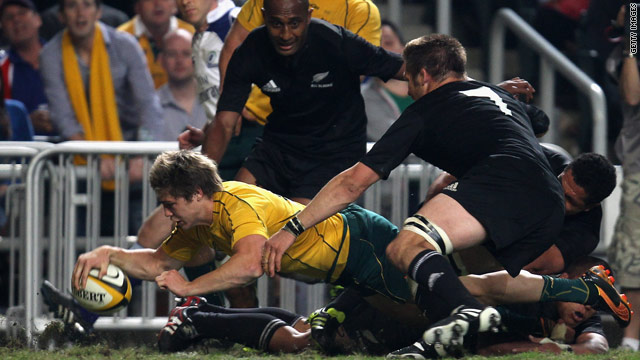 With both teams fielding strong line-ups, it was the first win for the Wallabies against the All Blacks -- who won the first three Bledisloe Cup matches this season -- since July 2008.

The All Blacks, the top-ranked team in the world, had seemingly been in control until the very last minute. Plenty of running rugby was on display but Australia began with a greater pace and purpose to go 12- 0 up after 24 minutes with tries from Quade Cooper and Adam Ashely-Coooper.

With Tri-Nations champions New Zealand looking off the pace and failing to get out of their half until the 20th minute, only missed kicks from Austrailan fullback Kurtley Beale and center Matt Giteau meant the Wallabies were not further ahead.

Both teams showed a willingness to run the ball from all positions, leading to some open play more reminiscent of the Sevens rugby played each year in the Hong Kong Stadium.

However, Australia couldn't keep control on the game and their scrum suffered as the All Blacks regained a degree of sharpness and composure.

First scrum-half Jimmy Cowan dived under the posts for a converted try before Cory Jane's try leveled the score, with a Dan Carter conversion putting the All Blacks ahead 14-12. A sucessful penalty by fly-half Carter, playing his first match for New Zealand since surgery on his ankle, put his team up 17-12 at halftime.

New Zealand stretched their lead to 12 points soon after the restart with a try by Ma'a Nonu. Australia continued to play with pace and hit back with a Drew Mitchell try on 60 minutes after a break from Beale and a sprint to the line before the covering defenders could reach him. O'Connor took over kicking duties as Giteau had been substituted, becoming his team's third kicker of the game.

At 24-19 ahead, the All Blacks seemed able to defend Australia's attacks, but penalties were still being given away by both sides.

A turning point came when Stephen Donald, a replacement for Carter, missed a penalty kick with four minutes remaining. The Wallabies were rejuvenated by his miss and soon made it back into the New Zealand's 22-meter line, hammering their try line until well past the fulltime hooter had sounded.

After countless phases of play aided by infringements by the All Blacks, O'Connor managed to dive over the line in the corner. From the sideline the 20-year-old held his nerve to covert the try and give Australia a deserved win in front of 26,000 fans.

"I've done a lot of these at training and put myself in that situation a lot, and I think [head coach] Robbie Deans has said a fair few times, 'This is the last kick to win the game', but that's the only one I've hit, so I'm pretty happy about it," O'Connor said after the match.

His previous successful last-minute match-winning kick came in a B-team game for his club side, Western Force.

On giving up their stranglehold over their neighbors, a phlegmatic Graham Henry, the New Zealand coach, said: "We wanted to keep our foot on the throat, and we haven't done that."

New Zealand captain Richie McCaw added: "We'll take the lessons out of today, why we made the mistakes and didn't get clean lineout ball.

"When you ask what the hardest test [in the upcoming European tour] is, it's always next week. You dont' get ahead of yourself."

Both teams are on their way to Europe to play a series of international matches in November.