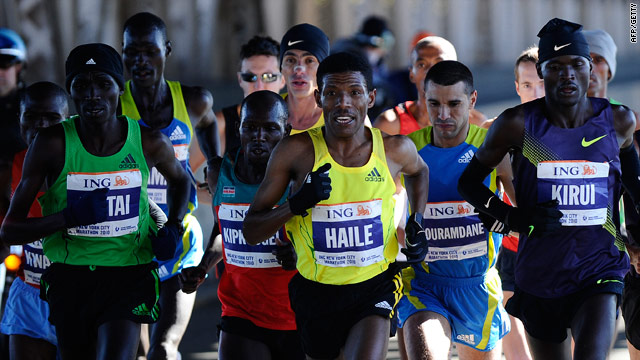 Haile Gebrselassie runs in the leading pack in New York before pulling out and announcing his retirement.
STORY HIGHLIGHTS

The 37-year-old dropped out of Sunday's New York City marathon with a knee injury then told reporters he had run his last race.

"I never think about to retire. But for the first time, this is the day," he said. "Let me stop and do other work after this."

Gebrselassie, a two-time Olympic 10,000 meters champion, is the world marathon record holder after setting a time of two hours three minutes 59 seconds in Berlin in 2008.

He was the star attraction in New York, but pulled out in obvious pain on the Queensboro Bridge while in the leading group at 16 miles.

"I don't want to complain anymore after this, which means it's better to stop here," he said.

Brendan Foster: Why should he retire?
I don't want to complain anymore after this, which means it's better to stop here
--Haile Gebrselassie
RELATED TOPICS

Gebrselassie, who has set a host of world bests over several distances in his storied career, had told his twitter blog that he was struggling with a knee problem, but gave no hint he would quit the sport.

His compatriot Gebre Gebremariam triumphed on his marathon debut to win in two hours eight minutes and 14 seconds.