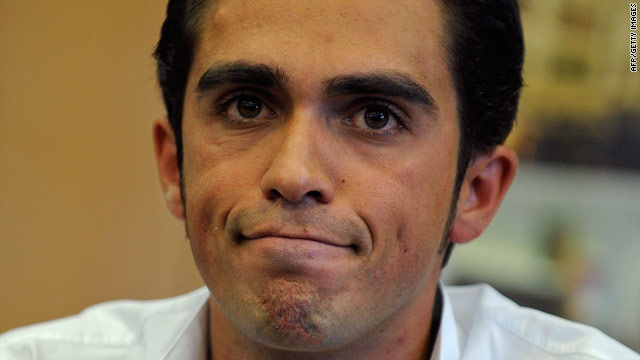 Alberto Contador's fate will now be decided by the Spanish cycling federation after the UCI requested a hearing.
STORY HIGHLIGHTS
RELATED TOPICS

Contador has been provisionally suspended since August 24 after a small amount of the banned substance clenbuterol was found when he was tested during a rest day en route to victory in July's 2010 Tour.

The 27-year-old, who will leave the Astana team at the end of next year, protested his innocence and said it must have been caused by contaminated food due to the extremely low levels present.

However, the International Cycling Union has decided to hand the matter to the the Spanish National Cycling Federation in order to comply with the procedure set out by the World Anti-Doping Code.

"At the end of a long and meticulous enquiry entrusted to highly qualified, WADA-accredited experts, and considering all the information currently in its possession, the UCI has concluded that disciplinary proceedings should be opened against Alberto Contador," the ruling body said in a statement.

"The UCI has sent its request to the Spanish federation that has competence in this regard. It is now the responsibility of this federation to determine whether Alberto Contador has breached the UCI Anti-Doping Rules.

"In the meantime, until the end of the proceedings and despite his provisional suspension, Alberto Contador still benefits from a presumption of innocence."