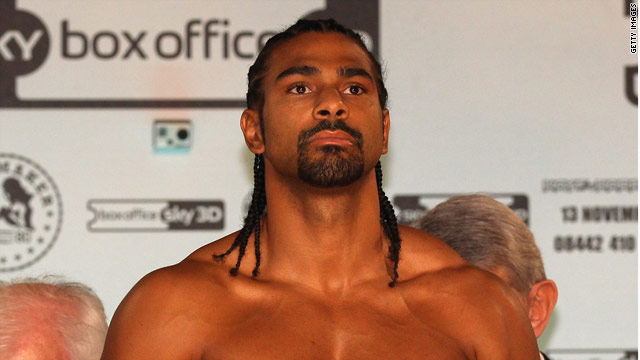 David Haye lived up to his pre-bout favoritism with a third round stoppage of compatriot Audley Harrison.
STORY HIGHLIGHTS

The domestic battle had been hyped as the "Best of Enemies" but in truth was a one-sided encounter once Haye caught up with the 2000 Olympic champion in the third round.

A flurry of punches left Harrison on the canvas and despite beating the count he could not withstand a further attack just under two minutes into the round.

Haye, a former world cruiserweight champion, went into the fight conceding a big weight advantage to Harrison, but it proved of little significance as the massive pre-fight favorite justified the odds.

I'm very happy with it, I said to those close to me I would stop him in three rounds
--David Haye
RELATED TOPICS

"I'm very happy with it, I said to those close to me I would stop him in three rounds," the 30-year-old Haye told BBC Sport after his 25th win from 26 bouts.

Harrison, 39, may well be considering his future in the sport of scarcely landing a punch in the opening two rounds before running into trouble when Haye found his range.

He falls to 27-5 in a 10-year professional career which started to much fanfare after his gold medal triumph in Sydney as an amateur.

It was Haye's second successful defense of the WBA title he won by beating giant Russian Nikolay Valuev last year.

Haye is now expected to fight one of the Klitschko brothers, Wladimir or Vitaly, who hold the other three versions of the world title between them.