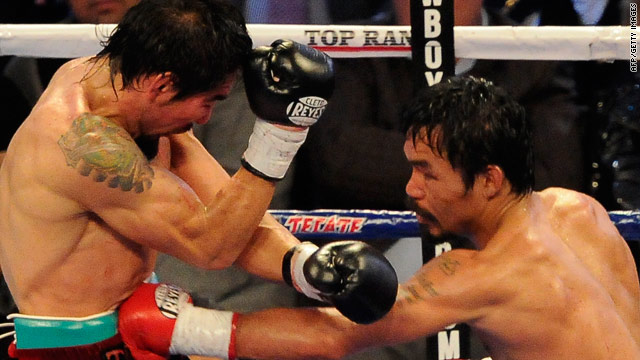 Manny Pacquiao (right) unleashes yet another flurry of punches against Antonio Margarito in Dallas.
STORY HIGHLIGHTS

(CNN) -- Manny Pacquiao staked his claim to be the best pound-for-pound boxer on the planet after his brutal demolition of Antonio Margarito in their WBC light-middleweight title bout in Dallas, Texas late Saturday.

Nicknamed Pacman, Pacquiao -- the only boxer in history to have won a world title at seven different weight divisions -- claimed his eighth belt in a new class after a unanimous decision over Margarito.

Pacquiao dominated from the outset, with his superior hand speed and power constantly troubling the Mexican fighter who had boasted a significant height and reach advantage.

But the champion's ruthless barrage of punches inevitably began to take their toll on Margarito's face as a nasty cut opened up below his right eye.

At one point in the 11th round Pacquiao appeared to look towards referee Laurence Cole as if he was trying to get him to call a halt to the fight.

I never expected him to be as strong as he was.
--Manny Pacquaio
RELATED TOPICS

Despite his domination Pacquiao could not land the knock-out blow against what was thought to be his biggest opponent yet, even taking a few powerful blows himself in the middle rounds.

"He is really strong," Pacquiao commented after the fight, in quotes carried by Agence France-Press. "I never expected him to be as strong as he was."

But he admitted that the injuries sustained by Margarito, who had completed a suspension after being caught with plaster-filled hand wraps in his gloves prior to a fight against Shane Mosley, caused him some concern.

"I feel for my opponent," Pacquiao said, in quotes carried by AFP. "His eyes (were swollen and cut) and bloody face. I wanted the ref to look at that."

The build up to the fight had been overshadowed by rumors that the Filipino could soon retire. Last month Pacquiao's long-time coach Freddie Roach said the Filipino was more preoccupied with his new role as a lawmaker and could not concentrate on his preparations for the November 13 bout.

The pair eventually agreed to move their training camp to the U.S. to focus on the fight.

Pacquiao had been lined up for an eagerly-awaited clash with American Floyd Mayweather Jr. earlier this year, but negotiations broke down amid a welter of recriminations and legal threats.

A clash with Mayweather would likely be the richest in boxing history, but appears no closer to fruition.