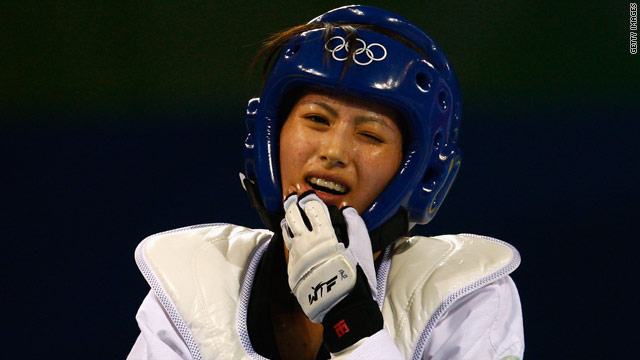 (CNN) -- Taiwan's government has threatened legal action after one of its taekwondo athletes was disqualified at the Asian Games in China.

Olympic bronze medallist Yang Shu-chun was leading during a match in the women's 49 kilogram division on Tuesday when it was halted due to claims she had used extra electronic sensors in her socks.

Taiwan's minister of sports affairs, Tai Hsia-ling, told reporters in Guangzhou that the island would take the case to the International Court of Justice unless it received "a reasonable answer" from the Asian Taekwondo Union, the Tapei-based Central News Agency reported.

Yang, who led Vietnamese opponent Vu Thi Hau 9-0 when the match was halted, was left in tears after the decision and a subsequent appeal to World Taekwondo Federation was rejected, the Taipei Times reported.

"This was an extremely unfair decision. I don't know what was wrong. All of my electronic protective equipment followed official specifications," she said on Wednesday.

"I brought two pairs of WTF-certified socks with me. The Chinese examiner asked me to scrap the first pair, but the second pair passed the examination.

"Before the start of [yesterday's] bout, the chief judge carefully examined all the equipment on my body and did not raise any questions."

Coach Liu Yung-lung said: "Even though the model was different, the judge did not find fault with it before the bout. If the judge had brought up the problem at the start, Yang Shu-chun could have changed her socks.

"This was negligence on the part of the organizers. Individual athletes should not have to pay for the authorities' problems."

Meanwhile, China leads the medal table after day five with 97 golds and 172 overall.

South Korea was second with 29 golds ahead of Japan (17), North Korea and Iran (both five) and Taiwan (four).

South Korean swimmer Park Tae-Hwan claimed his third freestyle gold of the week, adding the 100m title to his earlier victories in the 200m and 400m distances.

The 21-year-old Olympic 400m champion, who won a record seven medals in Doha four years ago, collected his fifth medal of the week.

China, however, have taken 22 out of a possible 32 golds going into the final day in the pool, with Tang Li claiming her fourth title with victory in the women's 100m freestyle.