Ponting determined to regain the Ashes 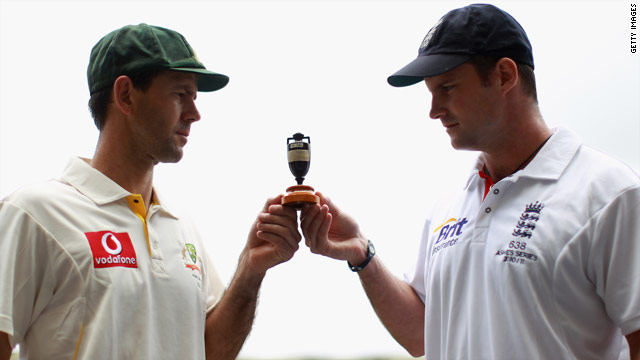 (CNN) -- Ricky Ponting hopes memories of last year's Ashes defeat to England will spur Australia on when the latest series begins in Brisbane on Thursday.

Ponting suffered his second reverse as captain in cricket's oldest battle, both coming in the northern hemisphere.

After the 2005 setback he was able to bounce back immediately with a 5-0 trouncing of the tourists, and this time he will lead out 10 of the 11 players who he made go onto the field at London's Oval after losing by 197 runs to surrender the Ashes urn.

"I made sure they all got down on the ground and they all took in our own disappointment, more the English excitement," the 35-year-old told the UK Press Association.

"I made sure that it hurt them as much as possible when the Ashes were being handed over to Andrew Strauss at The Oval. There's no doubt that's what's been driving certainly me, after all the work that I've done, but every one of the players as well.

It's a very strong home ground for Australia. But I think the prospect of maybe turning that record around excites us
--Andrew Strauss
RELATED TOPICS

"It's about that empty feeling we had in our stomachs after walking off The Oval again, after two successive Ashes tours. We want to make sure we don't have that feeling again."

Australia's only change from that game sees left-arm spinner Xavier Doherty brought in to make his Test debut, with Stuart Clark not selected.

Vice-captain Michael Clarke has been passed fit after recovering from a minor back problem.

Australia have not been beaten at the Gabba ground since 1988, and have lost just two series at home in the past 20 years.

"History suggests that for every touring team coming to Australia they generally find here and Perth the places harder to adjust and adapt to," Ponting said.

"England have been here a while, and in Hobart last week it seamed around a little bit. But history suggests we handle these conditions very, very well -- and opposition teams struggle a bit."

Andrew Strauss is seeking to become the first England captain to bring the Ashes back from Down Under since Mike Gatting in 1986-87.

"It's a very strong home ground for Australia. But I think the prospect of maybe turning that record around excites us," he said ahead of the first of five Tests.

"We had a similar record to contend with at Lord's last year -- and we were able to turn that around. If the guys put their minds to it, it could be potentially a very good start to the series to maybe overcome that record.

"In past years, Australia have really hit the ground running in the first Test match. They've made a conscious effort to go hard at the opposition, and there's no doubt the conditions here are slightly alien to a lot of touring sides -- especially touring sides that are maybe a bit undercooked or under-prepared.

"But we know what to expect. We've been out here for a while now, we've had a good look at a lot of the Australian conditions.

"We haven't had a particular look at the conditions at the Gabba yet. But we know how it plays and what types of shots to look to play and which ones to avoid."