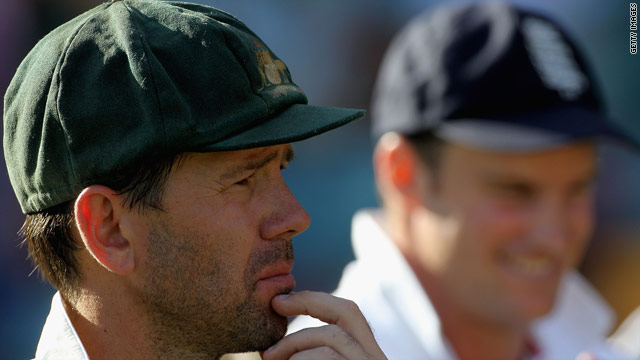 Australian captain Ricky Ponting, left, and his English counterpart show their feelings after the Test ends in a draw.
STORY HIGHLIGHTS

(CNN) -- Records tumbled as England saved the first Test match against Australia at Brisbane on Monday by scoring an enormous 517-1, meaning the tourists go into the next contest with the psychological advantage.

England ensured they would not lose after conceding a 221-run first innings deficit with Alastair Cook and Jonathan Trott sharing in England's highest partnership in Australia of 329 runs.

Cook scored only the fourth English double-century in Australia with an unbeaten 235, while Trott hit 135 not out before skipper Andrew Strauss declared shortly before tea.

Australia were 107 for one, chasing an unlikely 297 for victory, when the match finished in a draw. Captain Ricky Ponting scored his 56th Test half-century to be 51 not out and Shane Watson was on 41.

U.S. tweeter in a spin over Ashes mix-up

Cook's double century was the highest score by either team in 19 Ashes Tests at Brisbane while his unbroken partnership with Trott beat the previous highest stand by England in Australia of 323 held by Jack Hobbs and Wilfred Rhodes at Melbourne in 1911-1912.

Cook, who had never hit a double hundred in first class cricket, also broke the record of the legendary Australian batsman Don Bradman for the highest Test score at the Gabba.

Cook told the Press Association: "I feel slightly humble at that, slightly ruining all the records there for the wrong reasons but it's a nice one to have."

Trott's 100 also meant this was the first time three English players have scored a century in an innings of a Test match since 1924.

England cricket captain Andrew Strauss had insisted his side would take no chances on the final day of the Test after helping bat his side back into the match.

The series now moves to Adelaide in just three days, but Strauss said he was looking forward to the game. "There'll be a spring in our step going to Adelaide. But you've got to transfer that onto the pitch," Strauss said.

"It's all very well strutting around a hotel lobby feeling good about yourself, you need to make sure that turns into runs and wickets."

The tourists had appeared to be on the back foot ahead of Saturday's action, trailing by 202 runs as they resumed at 19-0 in their second innings in Brisbane.

But where previous England teams have capitulated in such situations -- such as in the 5-0 whitewash the last time they toured Down Under in 2006-07 -- this time the Ashes holders buckled down to reach 309-1 at stumps for a lead of 88.

Strauss bounced back from his third-ball duck in the first innings to score 110, his 19th century in Tests but his first in 24 innings.