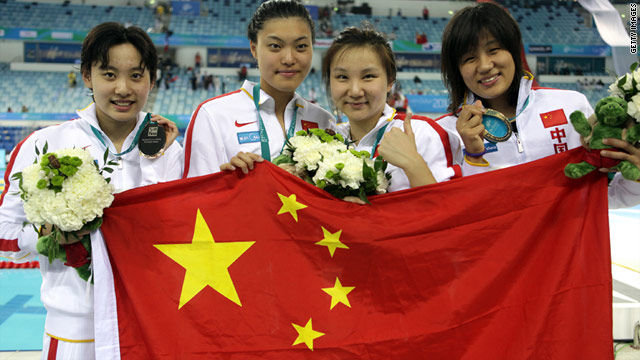 (CNN) -- China have smashed the women's 4x200m freestyle relay world record on the opening day of the world short course championships in Dubai.

The quartet of Chen Qian, Tang Yi, Liu Jing and Zhu Qianwei clocked a time of seven minutes, 35.94 seconds to power to the gold medal -- cutting a remarkable three seconds off the previous best mark set by the Netherlands in Manchester two years ago.

Australia took the silver medal and France the bronze, with all three nations going under the Dutch time.

Meanwhile, the men's 4x100m freestyle relay provided the finish of the evening as France took the honors ahead of Russia by a mere four hundredths of a second, with Brazil claiming the bronze ahead of the United States who finished a disappointing fourth.

In other events, American Ryan Lochte justified his favorite's tag with victory in the men's 200m freestyle.

The 26-year-old came into the championships with eight gold medals on his radar, but that number has already decreased by one following the United States' failure in the freestyle relay.

The other two gold medals on day one went to Mireia Belmonte of Spain, who clocked a championship record time to win the women's 200m butterfly, before adding 400m individual medley gold later in the evening.