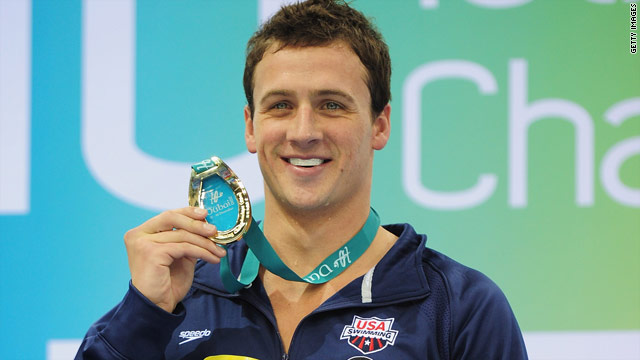 American Ryan Lochte with his gold medal after victory in the individual 400m medley.
RELATED TOPICS

(CNN) -- American Ryan Lochte secured the first individual world record of the year with victory in the individual 400m medley at the world short course championships in Dubai.

Lochte added to his gold medal in the men's 200m freestyle on the opening day by smashing the record set by Hungary's Laszlo Cseh in 2009.

The 26-year-old's time of three minutes 55.50 broke Cseh's record by nearly two seconds and confirmed his status as the best all-rounder in the world in 2010. He now boasts 17 competition medals since his debut in 2004.

"I didn't feel so good until the 200m, and then I started to feel myself again," Lochte told the official FINA website. "Every year, people get faster and world records are made to be beaten, so it's just a question of time."

Russia also claimed a world record, clocking a time under six minutes 50 seconds for the first time ever in the 4x200m freestyle relay.

Rebecca Soni claimed gold for America in a thrilling climax to the women's 50m breaststroke.

Soni, who won three gold's at the Beijing Olympics, beat Australia's Leiston Pickett by just one-hundredths of a second.

Spain recorded their first ever one-two at the championships after Erika Villaecija beat 20-year-old compatriot Mireia Belmonte Garcia into second in the 800m freestyle.