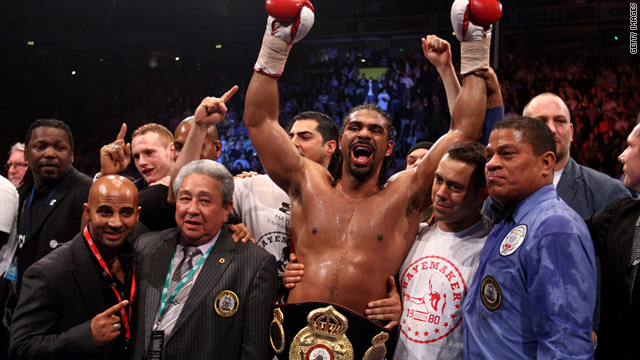 (CNN) -- David Haye's representatives have offered fellow-world heavyweight champion Wladimir Klitschko a 50-50 monetary split as an incentive to make a unification fight a reality in 2011.

"We are now perfectly positioned to get together and make this fight with Wladimir Klitschko happen," said Haye's trainer and manager Adam Booth on the 30-year-old's official website.

"We have sorted out all the old problems and disagreements and are ready to sign the deal with Klitschko's manager Bernd Boente.

"Despite the fact we know we bring more UK television money to the table, David and I are happy to split the entire pot 50-50 and grant Wladimir the deal he has wanted since day one.

"We have offered them 50-50 on everything -- just as they requested -- and now see no reason why this tremendous fight can't happen. The path is clear."

Haye himself added: "We have now ticked every box they have asked us to tick and I just hope Wladimir is as eager to fight as he tells everyone he is.

"We have removed every possible excuse and have shown we are serious about making this fight become a reality.

"I only pray Wladimir is as serious as we are, because this fight needs to happen for the good of the sport," Haye added.

Haye's camp was responding to German-based Ukrainian Klitschko's deadline of January 4 for a fight to be agreed.