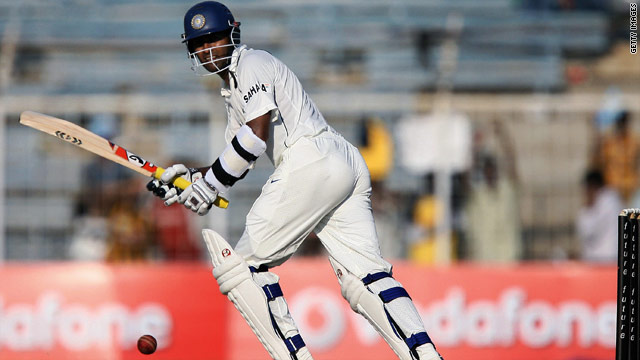 (CNN) -- A 13-year-old Indian boy has batted his way into cricket history with a record-breaking innings of 498 in a school tournament in Mumbai, India.

Armaan Jaffer, the nephew of former India international batsman Wasim Jaffer, hit the highest score ever made by a schoolboy in a local under-14 competition on Wednesday.

It was only three runs short of the alltime first-class record set by West Indies star Brian Lara in 1994.

Jaffer's huge total came from 490 balls, from which he hit 77 fours, and surpassed the 439 his Rizvi Springfield school teammate Sarfaraz Khan scored in 2009.

Rizvi eventually declared on an intimidating 800-8, with opponents IES Raja Shivaji School on 52-2 in reply at the end of the second day's play.

I am a little disappointed that I missed the 500-mark but as we say, 'One mistake and you are back in the pavilion'
--Armaan Jaffer
RELATED TOPICS

Despite his notable achievement, Jaffer expressed his regret that he was unable to reach 500 runs.

"I am a little disappointed that I missed the 500-mark but as we say, 'One mistake and you are back in the pavilion,' " he said in quotes reported on the Cricinfo website.

Jaffer and his teammates talk about his feat on YouTube

His uncle Wasim had previously broken the same record, but Jaffer insisted beating the landmark figure never crossed his mind and he thanked his coach Raju Pathak for his guidance during the innings.

"I was not thinking about any record, not about Sarfaraz's 439 and not even about Wasim uncle's 403. I was just following my coach's instructions. I am thankful to him for his motivation."

Pathak said he had given his batsman a free reign to play as he wished, having been on 295 when he resumed his innings.

"He is a very disciplined player," he said. "I had told him last evening I want you to play a long innings, so go ahead and score as many runs you want.

"Based on your innings, we will declare the target. But he surprised me as well and created a record innings. I am very pleased with his game."

Like millions of young cricket hopefuls in India, there is one man who Jaffer hopes to emulate when he is older.

"Sachin Tendulkar is my idol. His determination and focus are the things that stand out."