Would you pay $500K to go to LeBron James' birthday party? 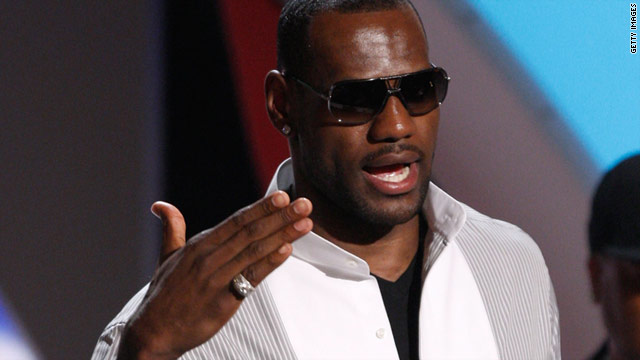 The self-styled "King James" is celebrating his birthday in a lavish manner with an 11-stop tour of the United States.
STORY HIGHLIGHTS

(CNN) -- He earns millions of dollars every year, but basketball star LeBron James wants investors to splash out up to $500,000 each to sponsor his lavish 26th birthday celebrations.

James, who earned a reported $14.5 million in salary this year, enlisted SA Global Plus -- whose website shows slides from a presentation given to potential investors.

The sponsorship opportunities range from $10,000 for a single event on his 11-stop "LeBron James Dinner Party Tour" to $500,000 for a season package.

Event is royal themed fitting for a birthday celebration of a king, channeling an ambience of extravagant court life
--SA Global Plus presentation
RELATED TOPICS

Next week's A-list party will take place at the Coco De Ville Lounge in Miami Beach's Gansevoort Hotel, and the presentation promises an array of stars including athletes, musicians and political figures who "reinvent and set the tone for a chic lifestyle."

The celebrity bash "is royal themed fitting for a birthday celebration of a king, channeling an ambience of extravagant court life."

Potential sponsors will have further chances to catch a glimpse of the self-styled "King" as his celebrations -- which started in New York this month -- keep going until the final date in Atlanta on April 10.

But for someone who pays so much attention to the finer details, his name is spelled "Lebron" throughout the presentation -- at odds with his own website's preference.

It is not the first time the former Cleveland Cavaliers guard, who calls himself "King James" on his Twitter account, has attracted attention away from the basketball court.

The six-time NBA All-Star ended months of speculation about his future in July, when he announced he would be joining the Heat on a live television special called "The Decision."

The broadcast, which led to James becoming a pariah among Cavaliers fans, attracted a reported 10 million viewers.

The Heat will take on two-time defending NBA champions the Lakers in Los Angeles in Saturday's high-profile Christmas clash.