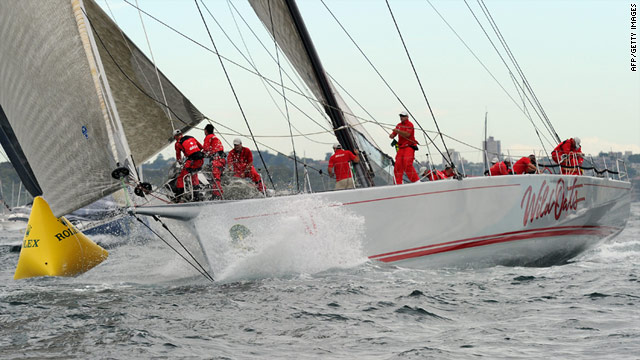 Wild Oats has the lead as it seeks a fifth victory in the annual "Bluewater Classic," which started in Sydney Harbor on Sunday.
STORY HIGHLIGHTS

(CNN) -- Australian maxi yacht Wild Oats XI is on course for a fifth line-honors victory at the Sydney to Hobart race after surviving gale-force conditions which forced 11 vessels to retire on Monday.

Wild Oats, which last won the 628-nautical-mile event in a record time in 2008, is expected to arrive at the Tasmanian capital at 9 p.m. local time (1000 GMT) on Tuesday.

"It was pretty arduous going, very hard to slow the boat down to keep it in one piece,'' navigator Ian Burns told the race's official website.

"We had to get down to very, very small sails and really work at keeping the boat slow so we weren't crashing off waves too much."

Our steering wheel was smashed by the boom when we took off our mainsail. We are very disappointed
--Exile's navigator Julie Hodder
RELATED TOPICS

Burns said the seas had calmed down and winds had slowed from 40 knots to 15, giving hope for the yachts trailing Wild Oats.

Ichi Ban lost its handicap lead on corrected time to Stephen Ainsworth's Loki, which had an advantage of 18 minutes.

Five of the 87 entries had to pull out in the space of an hour in the afternoon, then 1997 line honors winner Brindabella was among the later casualties as the severe conditions wreaked havoc.

"Our steering wheel was smashed by the boom when we took off our mainsail. We are very disappointed," Exile's navigator Julie Hodder reported.

Dodo had to divert to the New South Wales coastal town of Eden to drop off an injured crew member, who has a suspected broken arm, while Ludde Ingvall's 90-footer YuuZoo had already arrived there after being flooded early in the morning.

It was another setback for Ingvall, who had two crew members fall overboard on Sunday.