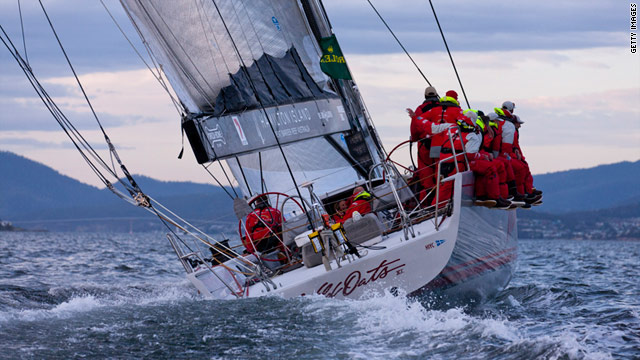 Wild Oats XI heads into Hobart on Tuesday, having led since the race left Sydney Harbor on Sunday.
STORY HIGHLIGHTS

(CNN) -- Wild Oats XI crossed the line first in the 66th Rolex Sydney to Hobart yacht race on Tuesday, but the Australian super maxi's fifth victory in the annual event is in doubt due to an official protest.

Wild Oats and British entry Ran were both reported by the race committee a few hours earlier after breaking safety rules by failing to make radio contact, and a hearing will be held on Wednesday.

"Both have reported only by telephone, which does not comply, so the protests were lodged at 5.05 p.m. today," committee chairman Tim Cox said.

The rules are in place after six people died when severe weather conditions hit the 1998 race, sinking five yachts and forcing a record 66 to retire.

"This is a fundamental safety issue," Cox said. "Should a situation occur, we cannot organize search and rescue operations via telephones. I consider this a serious breach."

The 100-foot Wild Oats, skippered by Australian Mark Richards, sailed into the Tasmanian capital two days, seven hours, 37 minutes and 20 seconds after leaving Sydney Harbor, having led most of the way.

"A few people got their facts mixed up," Richards said. "We've got some of the most accredited yachtsmen and women on this boat. We've won numerous world championships. We've dealt with juries all our lives and we're very confident we did everything by the book.

"It is disappointing. There is no way that as skipper I would have left Green Cape [on the south coast of New South Wales] without knowing we were 100% compliant with the rules."

But this time Richards and crew safely negotiated gale-force conditions which led to 16 boats retiring to finish well ahead of their rivals, completing their journey up the Derwent River at 8:37 p.m. local time (0937 GMT.)

Second-placed Investec Royal finished almost four hours later, having been becalmed in sight of the docks.

"The damage we sustained was to the reef lines earlier and some tack lines on the headsail which, running without a headsail, put us an hour back. Also, a fuel tank broke lose. These tanks carry so much fuel that you've got a quarter of a ton to manhandle, which is difficult," he said on Tuesday.

"We didn't realize that we had a substantial leak in the bow and carried on with a ton and a half of water, which we only detected this morning. We have a watertight bulkhead up there and when we opened it, water came pouring out."

Ran, skippered by Niklas Zennstrom and one of the pre-race favorites for line honors, had yet to finish.