India to retain No. 1 Test spot after Durban win 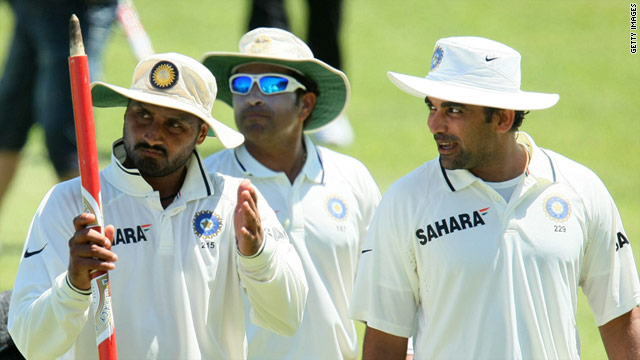 (CNN) -- India leveled the three-match series against South Africa with an 87-run victory in the second Test in Durban on Wednesday, ensuring the tourists will remain number one in the world rankings whatever the outcome of the decider in Cape Town next week.

South Africa, second in the Test standings, needed to complete a 3-0 series sweep to leapfrog their opponents into top spot.

But set a victory target of 303, the home side were dismissed for 215, just an hour after lunch on the penultimate day.

The home side's hopes had nosedived when overnight batsmen Jacques Kallis and A.B. de Villiers fell in the first hour of the day.

England retain the Ashes in Australia

It completed a remarkable fightback by India, who lost by an innings and 25 runs in the first Test in Centurion and were bowled out for a lowly 205 after being sent in to bat at Kingsmead on Sunday.

But boosted by the return of left-arm fast bowler Zaheer Khan, the Indians skittled South Africa for just 131 in their first knock before a crucial innings of 96 by man of the match V.V.S. Laxman helped set a target which the home side never looked capable of achieving.

Paceman Sree Sreesanth struck the early decisive blow when he removed South Africa's star batsman Kallis, producing a nasty, lifting delivery which he could only glove to Virender Sehwag in the gully.

De Villiers, who had made 33, then departed to a debatable leg-before-wicket decision to offspinner Harbhajan Singh, with replays showing the delivery would have passed over the stumps.

When Mark Boucher went to Khan, with replays again showing the decision misplaced, the Proteas were in deep trouble and Dale Steyn became the fourth wicket to go before lunch.

Ashwell Prince battled hard with the tailenders and finished on 39 not out, but with only Morne Morkel (20) offering much support, the end was not long coming.

Last man Lonwaba Tsotsobe was run out by a sharp return from short-leg fielder Cheteshwar Pujara to complete India's triumph.

Captain Mahendra Singh Dhoni was delighted with his team's progress to the summit of the Test rankings.

"We've played consistent cricket over a period of time. This process started in September 2008 and in the next two years we are in a position where we can say that in most of the places we have done well," he told gathered reporters.

South Africa captain Graeme Smith bemoaned the lack of the TV umpire referral system, which is not being used in the series, and was unhappy with the decision against De Villiers and Boucher.

However, he said poor batting on the second day had been costly.

"I don't think we played terribly in the Test, but that 131 wasn't good enough," the opening batsman said.

The deciding Test starts at Newlands in Cape Town on January 2.