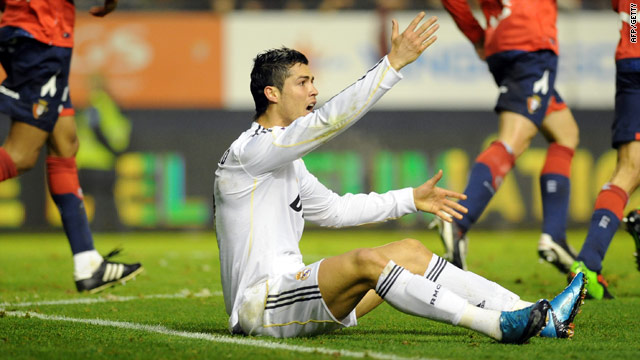 Real's Cristiano Ronaldo appeals in vain for a penalty in the goalless draw at Osasuna.
STORY HIGHLIGHTS
RELATED TOPICS

(CNN) -- Real Madrid missed the chance to leapfrog Spanish league leaders Barcelona as they were held to a disappointing goalless draw at Osasuna on Sunday.

Real were hoping to take advantage of Barcelona's 1-1 home draw against Villarreal 24 hours previously, but they remain two points adrift of the reigning champions after being held in Pamplona.

A win would have taken them top which is occupied by Barcelona with 40 points from 16 games with Real on 38 points. Valencia are next on 32 as the big two pull clear.

It was a tepid performance from Manuel Pellegrini's men with Osasuna having the better of the some half chances before the break and holding on for a point in the second half.

Real's best opportunity came on a counter attack just after the hour mark as Sergio Ramos was alert to thwart a dangerous home move.

The visitors charged up the other end and Gonzalo Higuian looked certain to score only to see his effort brilliantly tipped over by home goalkeeper Ricardo.

Higuian had an early opportunity but dragged his shot wide of the post, while Pellegrini's introduction of Karim Benzema and Raul from the bench failed to make the breakthrough.

Benzema shot wide from 12 yards and Cristiano Ronaldo also came close with a long-range effort but Osasuna were well worth their point having held Barcelona 1-1 at home earlier in the season.

In other key action on Sunday, Real Mallorca kept their perfect home record with a fine 2-0 win over Athletic Bilbao to move them up to fourth and into the Champions League places in Spain.

Real Madrid and Mallorca are the only teams left with perfect home records still in place after 16 rounds and goals from Julio Alvarez and Aritz Aduriz saw off a determined Bilbao challenge.

Their win moves Sevilla, long-time challengers to the Real and Barca this season, down to fifth.

Deportivo La Coruna failed to draw level on points with them and stay in sixth after a 0-0 draw at Real Zaragoza.