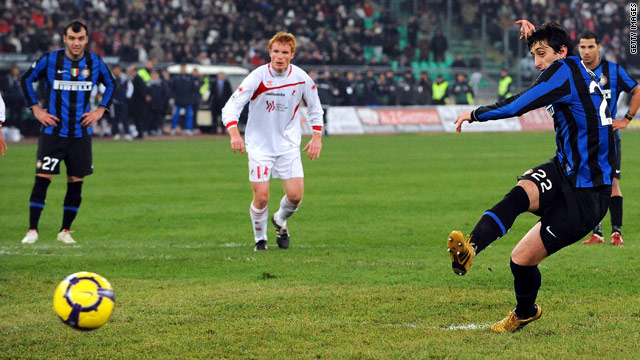 (CNN) -- Italian champions Inter Milan had to come from two goals down to earn a point at Bari on Saturday night in a match featuring three penalties.

After a goalless first half, Bari took the lead on the hour when visiting defender Walter Samuel handled a shot by former Inter youth player Riccardo Meggiorini, allowing Barreto to score from the spot.

The Brazilian, on loan from Udinese, repeated the feat three minutes later when Alessandro Parisi went down under a challenge from Lucio to give ninth-placed Bari hope of an upset victory.

But Inter pulled a goal back in the 69th minute as new signing Goran Pandev scored his first for the Nerazzurri, and his 50th in Serie A, with a close-range effort.

Meggiorini had a chance to score a late winner against his old club, but shot just wide.

Cagliari moved up to sixth place, ahead of Fiorentina and Palermo on goal difference, after beating Livorno 3-0 at home.

Joaquin Larrivey scored early in each half, while substitute Jeda netted in the 64th minute, as the Sardinians moved to within three points of third-placed Napoli, who host Palermo on Sunday while Fiorentina are at home to Bologna.

In Germany, Bayer Leverkusen returned to the top of the Bundesliga table with a 4-2 victory at home to Mainz.

Leverkusen moved two points clear of Bayern Munich, who had taken top spot for the first time since May 2008 with a 2-0 win at home to Hoffenheim on Friday night.

Leverkusen remained unbeaten with 38 points from 18 matches despite going behind in the eighth minute to Tim Hoogland's goal.

The hosts hit back with Michal Kadlec, Tranquillo Barnetta and Toni Kroos scoring inside half an hour, while Eren Derdiyok sealed victory for Jupp Heynckes' side with two minutes to go after Niko Bungert gave Mainz hope on 67.

Hamburg moved to within two points of Bayern, and above Schalke on goal difference, as Marcell Jansen and Mladen Petric scored in each half against Freiburg, who hover just above the relegation zone.

Defending champions Wolfsburg crashed 3-1 at Stuttgart, who moved out of the bottom three and up to 12th place.

Bochum eased their relegation worries with a 2-1 win at mid-table Borussia Moenchengladbach.