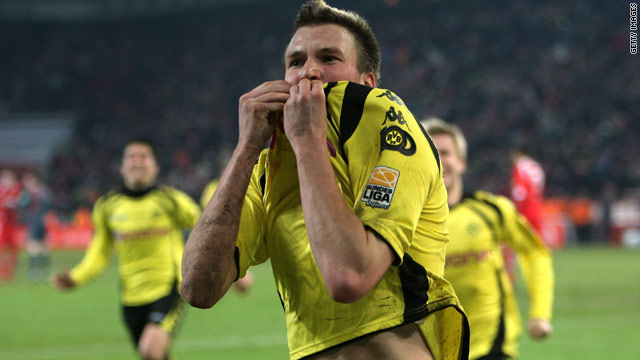 (CNN) -- In-form Borussia Dortmund made it five straight wins on Sunday with a topsy-turvy 3-2 Bundesliga victory at Cologne having looked like they had thrown the three points away.

That remained the score going into the final 10 minutes and Kevin McKenna's 82nd-minute strike looked nothing more than a consolation for the home side.

However, Kevin Grosskreutz popped up to win it in injury time with a shot that deflected past Cologne goalkeeper Faryd Mondragon.

That goal sealed victory for the visitors -- who remain fifth in the table, five points off the pace.

Meanwhile, Kevin Kuranyi's goal early in the second half was enough for Schalke to beat Nuremberg 1-0 at home to continue their good recent form.

Kuranyi scored the only goal in the 48th minute and the Schalke defence held firm to seal the points.

Felix Magath's side clinched their fourth straight victory and fifth in the last six games to return to second place in the table, just one point behind leaders Bayer Leverkusen.