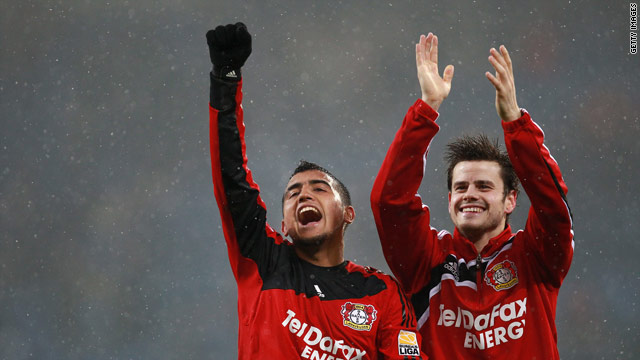 (CNN) -- Bayer Leverkusen wrested back the Bundesliga leadership from Bayern Munich with an emphatic 3-0 win at Hoffenheim on Sunday.

Bayern's 3-2 victory at Werder Bremen on Saturday had seen them go temporarily top, but Bayer made no mistake to claim three points.

The visitors were ahead through former Liverpool star Sami Hyypia after 11 minutes with Toni Kroos (51) and Tranquillo Barnetta (72) adding further goals in the second half.

Kroos, who is on loan from Bayern, underlined his value to his new side by making two goals and scoring the other -- his fifth in the last four German league games.

Leverkusen took the lead when Kroos curled in a free-kick for Hyypia to slide home from close range.

Kroos converted a cross from Swiss international Eren Derdiyok for the second before providing the final assist for Barnetta to seal the victory.

It leaves Bayer Leverkusen with 41 points from 19 games, two ahead of Bayern with Schalke a further point back in third.

But it was Cologne who scored the winner as Adil Chihi converted.

The defeat leaves Wolfsburg in 10th with Cologne up to 13th.