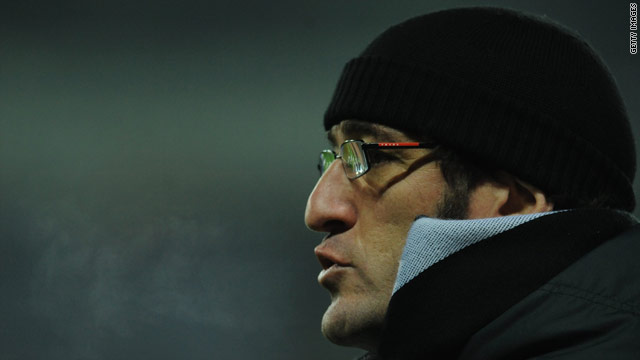 Ferrara quickly felt the chill at Juve and the Coppa Italia match against Inter on Thursday was his last in charge.
STORY HIGHLIGHTS

(CNN) -- Juventus have sacked coach Ciro Ferrara after a string of poor results and have installed Alberto Zaccheroni in the hot seat until the end of the season.

Ferrara's position has been threatened after a dismal run which has seen them slip out of contention in the Serie A title race as well as being eliminated from the Champions League at the group stages.

Thursday's 2-1 Coppa Italia defeat to Italian champions Inter Milan proved the final straw and the club released a statement to confirm his departure and Zaccheroni's arrival.

"Zaccheroni will take over the team immediately and will guide this afternoon's training session in Vinovo before being officially unveiled to the media," it read.

Ferrara joined Juve late last season and steered the Turin powerhouses to second place in Serie A behind Inter.

But his first full campaign in charge proved challenging after a promising start to the season.

The Bianconeri have lost five of their last six games in Serie A and have slumped to sixth in the standings, four points behind Napoli, who hold the last Champions League qualifying spot.

Zaccheroni will hope to get them on track with his first game against Lazio on Sunday.

The 56-year-old has coached at a number of leading Serie A clubs and helped AC Milan to the 1999 Italian title, but it is his first job since being sacked by Torino in February 2007.

Ferrara, a former Italy international and Juventus defender, was given the reins despite his lack of experience, succeeding current Roma coach Claudio Ranieri, who was fired.

Zaccheroni's appointment ends, for now, media speculation that Liverpool manager Rafael Benitez would take charge at Juve, but the short-term nature of his contract until June raises questions about the permanence of his stay.

Benitez acknowledged the speculation in his weekly press conference on Friday.

"I am focused on preparing my team for the game against Bolton. I know they (Juventus) were interested, that is part of the game now in football, but I am not ready to talk too much because I don't want to lose my focus.

"When you are a manager and you have clubs asking (for you), you have to be proud because they are a top side in Europe, but I am really happy here and want to do my job as best I can."