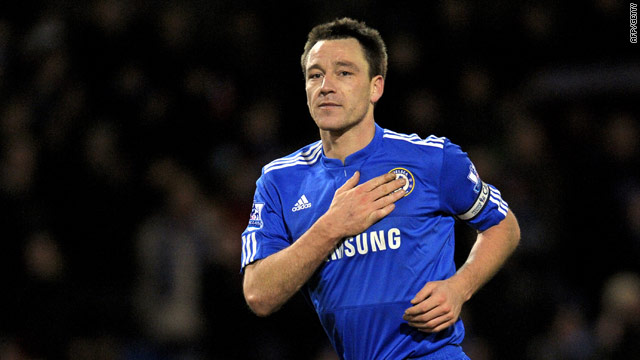 (CNN) -- England captain John Terry shrugged off lurid allegations about his private life to score the winning goal as Chelsea claimed a vital 2-1 victory at Burnley to go four points clear in the Premier League.

Terry unsuccessfully failed with a High Court injunction to prevent newspapers publishing the revelations about an alleged affair with the former girlfriend of ex-teammate Wayne Bridge.

There were doubts that Terry would even play at Turf Moor, but with the clock counting down and the scores tied 1-1, he came up for a corner and headed an 82nd minute winner.

The win takes Chelsea four points clear of Manchester United, who play third-placed Arsenal in a vital match in the title race at the Emirates on Sunday.

"It was a very difficult game," Chelsea manager Carlo Ancelotti told ESPN before praising his captain.

"He's a fantastic player. Every game, he plays very well.

"He's an important player for us. All of Chelsea support him."

He's an important player for us. All of Chelsea support him
--Carlo Ancelotti praises John Terry

Nicolas Anelka had given Chelsea a 27th-minute lead with his sixth goal in six games, but the relegation battlers equalized in the 50th minute as Steven Fletcher foxed defender Alex before shooting past Petr Cech.

Earlier, the race for the fourth Champions League place tightened up as Tottenham were held 1-1 at Birmingham. Jermaie Defoe looked to have given Spurs three points until Liam Ridgewell's injury-time equalizer.

But their rivals for fourth, Liverpool and Aston Villa, both won to keep up the pressure.

Liverpool beat Bolton 2-0 to stay a point adrift of Spurs in fifth while Villa, who have a game in hand, are two points behind after defeating Fulham by the same scoreline in a match where Gabriel Agbonlahor scored both goals.

In the tight relegation battle, second from bottom Hull failed to climb out of the relegation zone after a 2-2 home draw with fellow strugglers Wolves.

In-form Everton made it four league wins from five with a 1-0 victory away to Wigan while Blackburn Rovers and West Ham shared the points in a goalless draw at Upton Park.