Leverkusen return to top of Bundesliga 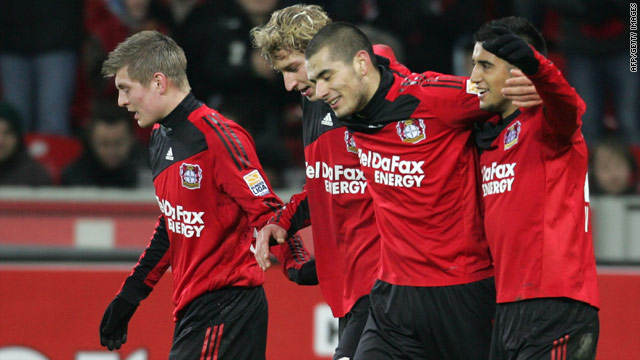 Bayer Leverkusen remain unbeaten as they returned to the top of the German Bundesliga table on Sunday.
STORY HIGHLIGHTS
RELATED TOPICS

(CNN) -- Bayer Leverkusen scored three goals in four minutes late in the first half as they surged back to the top of the German Bundesliga with a 3-1 home win over Freiburg.

Stefan Kiessling opened the scoring for the home side in the 36th minute and Eren Derdiyok doubled their advantage a minute later.

Former Liverpool defender Sami Hyypia made it 3-0 after 39 minutes, with Felix Bastians pulling a goal back midway through the second half.

The result maintains Leverkusen's remarkable unbeaten record this season and their fourth straight win moves them onto 44 points, two points ahead of Bayern Munich.

Elsewhere, Stuttgart scored three goals in the final 15 minutes to sink Borussia Dortmund 4-1 and continue their climb up the table.

Stuttgart went ahead after 15 minutes when Dortmund defender Felipe Santana put through his own goal before Lucas Barrios levelled 10 minutes into the second half.

Jurgen Klopp's Dortmund side had also come into the match in good form, but this defeat saw them suffer their first loss in 13 matches.

Meanwhile, Germany international midfielder Thomas Hitzlsperger has completed his move from Stuttgart to Serie A side Lazio.

The club confirmed the deal following Sunday's win, with director of sport Horst Heldt telling the official Web site: "It was not easy for us to let Thomas leave since he is a player who identifies himself a lot with the club."

The 27-year-old former Aston Villa midfielder had fallen out of favor under new coach Christian Gross.