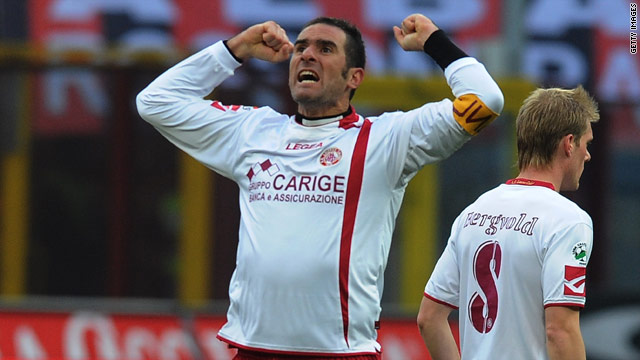 (CNN) -- AC Milan wasted a golden opportunity to close the gap on leaders and city rivals Inter at the top of the Italian Serie A table after being held to a 1-1 draw at home to lowly Livorno.

With Inter's match at Parma postponed because of heavy snow, a Milan win would have closed the gap at the top of the table to eight points -- with both teams having played 21 matches.

Veteran midfielder Massimo Ambrosini put Milan ahead on the stroke of half-time when he hooked the ball home after goalkeeper Francesco Benussi failed to deal with a David Beckham cross.

But Cristiano Lucarelli poked home a mis-hit Claudio Bellucci shot just before the hour mark to earn Livorno a point.

It completes a difficult week for Leonardo's side following their surprise Italian Cup defeat to Udinese and last weekend's 'derby' reverse at the San Siro.

Milan's failure to win means in-form Roma have joined them on 41 points after a narrow 2-1 home win over bottom side Siena.

Jon Arne Riise had put the hosts in front in the 29th minute before Siena's Simone Vergassola equalized just before half-time.

However, striker Okaka flicked home the late winner to earn Cluadio Ranieri's side a fourth successive Serie A victory.

Elsewhere in Italy, striker Antonio Cassano has confirmed he has turned down the chance to join Fiorentina, choosing to remain with Sampdoria despite reports of a fall-out with coach Luigi Del Neri.

On the pitch, Sampdoria maintained their Champions League challenge with a comfortable 2-0 win over strugglers Atalanta.

Meanwhile, Juventus moved up a place to fifth, going above Palermo, after a 1-1 draw at home to Lazio.

However, Stefano Mauri converted a cross from Mauro Zarate to level matters with just 12 minutes remaining.