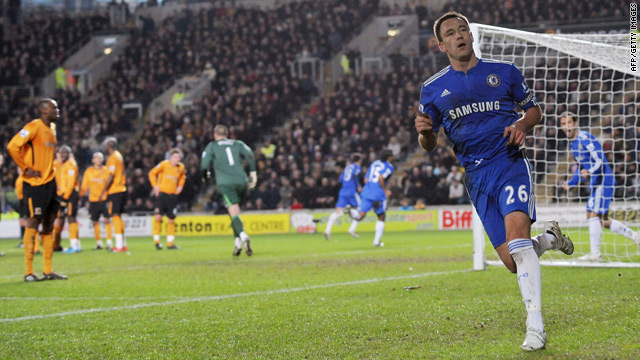 (CNN) -- England captain John Terry braved the public eye despite continuing revelations about his private life, but his table-topping Chelsea team were held to a shock 1-1 draw at relegation-threatened Hull City on Tuesday night.

British media had reported that Terry would miss the Premier League match to be with his wife Toni, who is supposedly in Dubai to get away from allegations about his infidelity.

But the defender and father of two, whose role as national captain is in doubt after he allegedly had an affair with the ex-partner of his former Chelsea teammate Wayne Bridge, fronted up at the KC Stadium to jeers from the home fans.

Terry scored the winner against Burnley in his first match since the media storm broke, having failed in his bid to win a court injunction to prevent any such publication, but this time saw his team squander a great chance to move four points clear of second-placed Manchester United.

Indeed, the Londoners needed an equalizer from Didier Drogba on his return from Africa Cup of Nations duty with the Ivory Coast to move two ahead of United, with both teams having now played 24 out of a scheduled 38 matches.

Chelsea should have taken the lead in the 25th minute when Germany midfielder Michael Ballack headed Branislav Ivanovic's cross straight at goalkeeper Boaz Myhill when unmarked in front of goal.

And the visiting defense were caught out five minutes later when Hull center-back Steven Mouyokolo escaped his marker Ballack and rose above Terry to head home winger Stephen Hunt's corner.

It was the striker's 20th league goal this season, and his second against Hull this season.

Defender Anthony Gardner should have put Hull back in front after the break but headed Tom Cairney's free-kick over the bar from close range, then Terry was booked for a clumsy challenge on Jozy Altidore.

The United States striker should have made Chelsea pay, but completely mistimed his header from Hunt's delivery.

Chelsea pressed for a winner, but Myhill denied substitute forward Dean Sturridge late on to leave the hosts third from bottom.

Meanwhile, Wolverhampton Wanderers, the team immediately above Hull in the table, were knocked out of the FA Cup after losing 3-1 at second division Crystal Palace.

Palace, who were forced into administration last month with debts of $48 million, can look forward to a money-spinning fifth-round tie at home to Premier League high-flyers Aston Villa after winning the replay.

Danny Butterfield, usually a defender but forced into playing up front due to the club's injury problems, scored three times in six second-half minutes before Karl Henry netted a late consolation for the visitors.

Butterfield had scored just once in six seasons before the match.

County, also in financial difficulties following the failed pre-season takeover which brought former England manager Sven Goran Eriksson to the club as director of football, will travel to Premier League side Fulham in the fifth round.

Stephen Hunt put County, the world's oldest professional league club and the lowest-ranked team left in the tournament, ahead with 15 minutes left as he headed in a corner by Ben Davies.

Davies was again involved as Wigan's new signing Gary Caldwell deflected the ball into his own net three minutes later.