Inter Milan on course for double in Italy 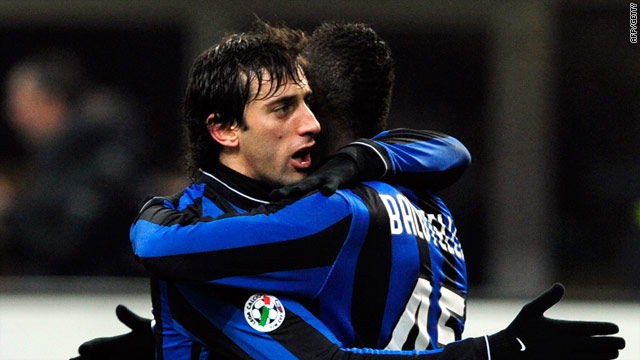 Milito is congratulated after scoring the crucial goal for Inter in the San Siro.
STORY HIGHLIGHTS
RELATED TOPICS

(CNN) -- Inter Milan stayed firmly on course for a league and cup double in Italy with a 1-0 victory over Fiorentina in the first leg of their cup semifinal on Wednesday night.

Diego Milito scored the only goal of the game in the San Siro, but they will have to wait until April 14 to see if they reach the final when the second leg is played in Florence.

Argentina star Milito scored in the 34th minute after an assist by Mario Balotelli, but Inter could rue missed chances to seal a more emphatic victory.

Inter coach Jose Mourinho showed his determination for his side to achieve a double as he picked a strong team with only first choice goalkeeper Julio Cesar left out.

After a slow start, Inter went ahead when Balotelli took advantage of hesitation by Cesare Natali to set up Milito for an easy opener.

Milito had an effort ruled out for offside in the second half while Fiorentina substitute Stevan Jovetic wasted their best chance.

Balotelli showed his displeasure at being substituted by Mourinho and could face punishment for his public reaction.

Goran Pandev then missed a gilt-edged chance to give Inter a two-goal cushion for the second leg.

AS Roma are home to Udinese in the second semifinal first leg on Thursday.

In the Scottish League Cup, Rangers earned a final clash against St.Mirren with a 2-0 win over St.Johnstone.

Steven Davis and Lee McCulloch scored the first half goals for the league leaders. The final will be at Hampden Park on March 21.