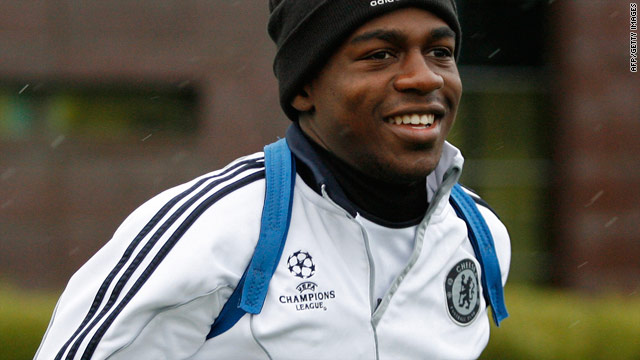 (CNN) -- English Premier League leaders Chelsea have successfully ended their dispute with French club Lens over the signing of Gael Kakuta, ending the possibility of a worldwide transfer suspension until mid-2011.

Football's world governing body FIFA initially punished the London side in September after Lens complained that they had illegally induced the teenage Kakuta to breach his contract in 2007.

Chelsea took the case to the Court of Arbitration for Sport, who suspended the ban until a hearing could be heard, making it possible for manager Carlo Ancelotti to make signings in the January transfer window.

It had been speculated that owner Roman Abramovich would bankroll a huge spending spree to safeguard against the appeal failing, but Chelsea made no moves in the market despite losing four key players to the Africa Cup of Nations tournament in Angola.

CAS announced on Thursday that it had ratified an agreement between Chelsea and Lens which had effectively ended the arbitration procedure.

"The two clubs and the player have recognized that the contract between the player and RC Lens was not valid," the appeal body said.

"Accordingly, the player could not have terminated it prematurely and without just cause and Chelsea cannot therefore be liable for inducing a breach of contract.

"As a consequence, in light of these new circumstances, the sanctions imposed upon Chelsea FC and the player by the FIFA Dispute Resolution Chamber had to be lifted.

"In accordance with the parties' request, the entire proceedings including the arbitral award and the agreement shall remain confidential and the CAS will not comment on this matter any further."

The 18-year-old Kakuta, who was voted the side's academy player of the year in his first 12 months with Chelsea, received a personal suspension of four months as a result of the initial ruling and was also fined $1 million.

Chelsea were fined $180,000 to cover player development costs, which the club said they would still pay Lens.

"It was always our intention to work together with Lens to reach this end, and both clubs have strengthened their relationship as a result of resolving this case to everyone's satisfaction," chairman Bruce Buck told the Chelsea Web site.

"In an act of good faith and with a view to the possibility of future collaboration with Lens, and without recognizing any liability, Chelsea has agreed to pay compensation costs for the training given to the player while at Lens, as mandated by FIFA in its original ruling."

Meanwhile, Premier League crisis club Portsmouth have had a fourth change of ownership in six months, and there is likely to be another before the end of this season.

Hong Kong-based businessman Balram Chainrai, who was born in Nepal but has a UK passport, has taken over Ali Al Faraj's 90 percent stake after activating a clause in their $27 million loan agreement.

The UK Press Association reported that the Saudi's lawyer is contesting that action, but Chainrai is seeking to stabilize the debt-ridden club's finances before selling his shares.

He will try to delay the winding-up hearing scheduled for next Wednesday over $11.8 million in unpaid taxes.

"The club will now apply to HMRC to adjourn next week's winding-up hearing to allow time for the club to be stabilized and new owners found," Portsmouth said in a statement on the club's Web site on Thursday.

"Peter Storrie continues as the chief executive officer of the club and continues to run the club."

Portsmouth said Al Faraj's financial advisor Daniel Azougy would no longer be involved in the club. The lawyer has been convicted of fraud in his native Israel, PA reported.