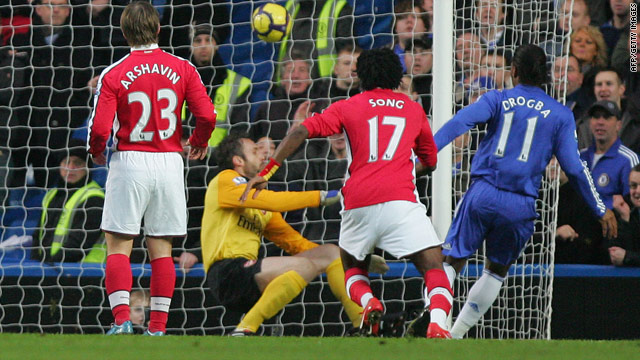 Didier Drogba, far right, puts Chelsea on the way to a 2-0 victory at home to London rivals Arsenal.
STORY HIGHLIGHTS

(CNN) -- Chelsea reclaimed the lead in the English Premier League as Didier Drogba continued his hot scoring run against title hopefuls Arsenal with both goals in a 2-0 victory on Sunday.

Ivory Coast striker Drogba has now netted 12 times in 12 encounters with Chelsea's London rivals, and could have had a hat-trick as his second-half free-kick thumped against the bar.

Arsenal's title challenge has disintegrated in the past two weeks, with a goalless draw against European hopefuls Aston Villa followed by a 3-1 home defeat by United, and Arsene Wenger's team must now face fourth-placed Liverpool on Wednesday.

"It is difficult to swallow a defeat like that when we felt we were the better team," Wenger told reporters. "Chelsea defended well until the last minute, so you have got to give them credit. We are outsiders but we will fight until the last day of the season."

Chelsea successfully bounced back from the shock draw with lowly Hull in midweek, which came as speculation about the future of England captain John Terry reached fever pitch.

The defender was subsequently stripped of the national armband by England boss Fabio Capello due to tabloid revelations about the player's private life, particularly his alleged marital infidelity with the former partner of his one-time Chelsea teammate Wayne Bridge.

But Terry, publicly backed by his club coach Carlo Ancelotti, showed on Sunday that his performances on the field have not been affected by the controversy as Chelsea's solid back four rendered Arsenal's silky passing game near impotent in the last third of the pitch.

And it was Terry who helped Drogba score the eighth-minute opening goal, heading a corner to the far post where his unmarked teammate coolly slotted the ball into the net past exposed goalkeeper Manuel Almunia.

Arsenal dominated possession in the first half, but the closest they came to scoring was when Russia forward Andrei Arshavin's volley was well blocked by the legs of keeper Petr Cech.

Drogba's second goal 15 minutes later knocked the stuffing out of the visitors as he cut in from the right and lashed in a fierce left-foot shot after being fed by Frank Lampard on the counter-attack, with Arsenal guilty of schoolboy defending.

Arsenal poured forward in the second half but were unable to penetrate as Chelsea could afford to sit back and absorb the pressure.

Wenger brought on Czech winger Tomas Rosicky and defender Emmanuel Eboue for Abou Diaby and Bacary Sagna with 15 minutes left, but it was Chelsea who almost scored again.

Drogba curled a powerful free-kick against the crossbar, with Almunia left helplessly unable to even try to save it.

In Sunday's other match, Birmingham City moved up to eighth place as veteran striker Kevin Phillips came off the bench to score both goals in the 2-1 win at home to Midlands rivals Wolverhampton Wanderers.

The visitors took the lead on manager Mick McCarthy's 51st birthday when striker Kevin Doyle reacted fastest to score after City defender Roger Johnson diverted a low cross onto his own post three minutes before halftime.

But the 36-year-old Phillips scored twice in the last 10 minutes in a rare first-team outing this season to leave promoted Wolves in the bottom three.

The former England international leveled after Craig Gardner headed the ball back across goal, and then volleyed the winner five minutes from time after chesting down a chip from fullback Stephen Carr, who was allowed to run into the penalty area.