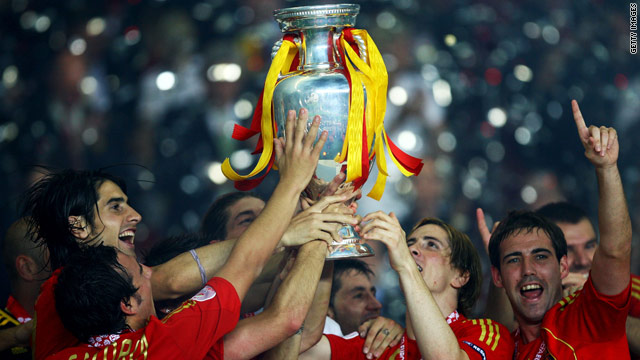 Spain's players will be seeking to repeat their success of 2008, when they defeated Germany in the final.
STORY HIGHLIGHTS

(CNN) -- European champions Spain were drawn with 2004 semifinalists the Czech Republic as they begin the defense of their title this year in qualifiers for the 2012 tournament in Poland and Ukraine.

Vicente del Bosque's team were placed in one of three five-nation groups on Sunday, being the last out of the hat, with the other six pools featuring six teams.

The nine group winners qualify automatically along with the best runner-up and the two hosts, with the other eight second-placed sides facing playoffs in November 2011.

Spain and the Czechs, the 1996 runners-up, are in Group I along with Scotland, Lithuania and minnows Liechtenstein, with the first qualifiers to be held in September this year.

In the other five-nation pools, England are the top seed in Group G and will have to get past 2008 co-hosts Switzerland, the unpredictable but talented Bulgaria, Wales and Montenegro.

Cristiano Ronaldo's Portugal, quarterfinalists in 2008 and losing finalists at home in 2004, were drawn in Group H with 1992 champions Denmark, Norway, Cyprus and Iceland.

World champions Italy also face a testing time in six-nation Group C after being drawn with Serbia and Slovenia, who have both qualified for this year's World Cup finals and will be seeking to continue that progress.

Three-time champions Germany were drawn in Group A with Turkey, who they beat in the 2008 semifinals before losing to Spain. Neighbors and that year's co-hosts Austria are also in the same group along with Belgium, Kazakhstan and Azerbaijan.

Netherlands, ranked third in the world behind Spain and Brazil, should be confident of qualifying from Group E ahead of Sweden, with Finland, Hungary also battling for a runner-up spot ahead of minnows Moldova and San Marino.

Two-time champions France are again drawn with Romania, who failed to qualify from their 2010 World Cup pool but made it through to Euro 2008. Bosnia-Herzegovina, beaten by Portugal in the World Cup playoffs last year, were also drawn in Group D.

Russia failed to qualify for the World Cup in South Africa, but are joined in Group A by a team who did as pool winners, Slovakia, and the Republic Of Ireland -- who lost a controversial playoff to France made infamous by Thierry Henry's handball.