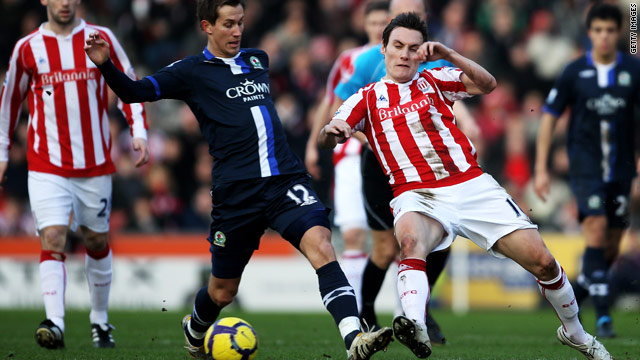 (CNN) -- British police are investigating the death of a man who was found unconscious at a soccer match on Saturday.

A 30-year-old, who has not yet been named, died in hospital in the early hours of Sunday morning following Stoke City's Premier League match at home to Blackburn Rovers.

He was treated at the Britannia Stadium for a head injury and cardiac arrest before being taken to the University Hospital of North Staffordshire, Stoke's Web site reported.

"A 30-year-old man was pronounced dead at 1.55 a.m. this morning," Staffordshire Police said in a statement on Sunday.

"The circumstances are being fully investigated and a 25-year-old man remains in custody and is helping police with their inquiries."

This is the tragic loss of a young man. Our thoughts and deepest sympathies go to his family
--Stoke's chief executive Tony Scholes

Stoke's Web site reported that the dead man was one of 1,300 Blackburn supporters to attend the match, which City won 3-0.

He was found on the concourse of the stadium's SEAT stand at about 4 p.m. during the halftime break.

"This is the tragic loss of a young man. Our thoughts and deepest sympathies go to his family," Stoke's chief executive Tony Scholes said.

Blackburn also released a statement of condolence to the man's family.