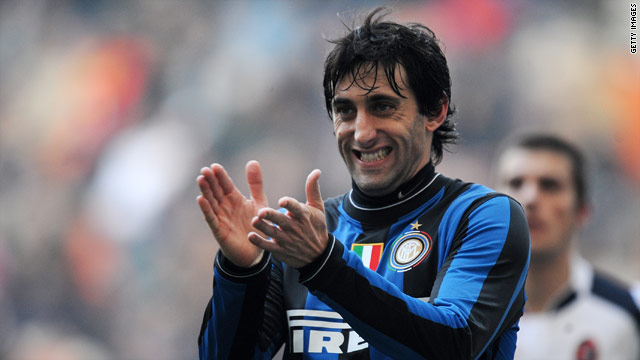 Diego Milito applauds his teammates after being set up to score Inter's third in the San Siro.
STORY HIGHLIGHTS
RELATED TOPICS

(CNN) -- Inter Milan took a stranglehold on the Serie A title with a 3-0 win over Cagliari on Sunday which saw them open a 10-point lead over city rivals AC Mlan, who could only manage a goalless draw at Bologna.

Roma's later 1-0 win at Fiorentina, with Mirko Vucinic scoring the only goal, saw them move into second place above Milan, eight points adrift of Inter but having played a game more.

Milan's draw continue their disappointing form which began with a defeat in the derby match against reigning champions Inter two weeks ago.

Since then they have drawn their next two matches, with Inter taking full advantage, although they are facing a renewed challenge from Roma, who have gone 12 games without defeat.

Samuel Eto'o, playing his first game since returning from Africa Cup of Nations with Cameroon, set up Pandev to score at the near post.

Cagliari had a goal chalked off for offside which TV replays showed should have stood and Julio Cesar pulled off a brilliant save to deny fellow Brazilian Nene.

There hopes of a revival were ended in the early stages of the second half as a neet move involving Eto'o and the excellent Pandev saw Milito score the third.

Milan had the better chances at Bologna and Ronaldinho hit the crossbar with a spectacular effort in the second half. Late on, captain Mansion Ambrosia also saw an effort rebound off the woodwork.

In other action, Antonio Di Natale scored a hat-trick for Udinese in a 3-1 home win win over Champions League aspirants Napoli.

At the other end of the table, rock-bottom Siena lost 2-1 to Sampdoria, who are also chasing a European place, while troubled Lazio slipped into the relegation zone after a 1-0 defeat at home to Catania.

In the German Bundesliga, Eintracht Frankfurt jumped to seventh with a fine 3-2 away win over Borussia Dortmund.

Lucas Barrios made it 2-1 for Dortmund in the 57th minute, but goals from Sebastian Jung and Alexander Meier saw Frankfurt to three valuable points.

In Sunday's action in Spain's La Liga, nine-man Sevilla crashed to a 2-1 defeat at Real Zaragoza to slip out of the top four.

Sevilla striker Alvaro Negredo scored an own goal to give Zaragoza a winning lead and was then sent off for violent conduct.

Real Mallorca leapfrog them into fourth as they scored a 10th home victory in a row to beat Villarreal 1-0.