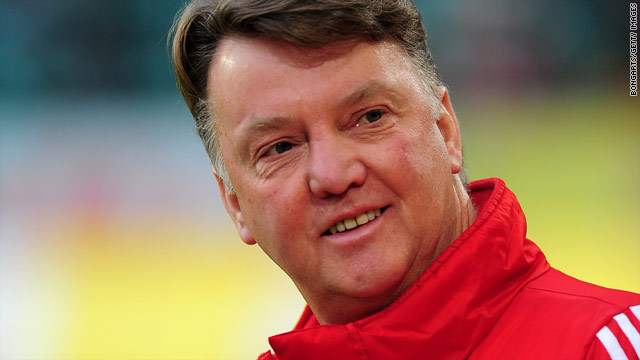 Louis Van Gaal wants to see out his contract with Bayern Munich, but says he may coach a national side again.
STORY HIGHLIGHTS
RELATED TOPICS

(CNN) -- Nigeria's short-list of targets for the vacant national manager's job has been cut by one after Bayern Munich coach Louis Van Gaal distanced himself from the role.

The 58-year-old has previous international experience following a two-year spell in charge of the Netherlands, but made it clear that he wants to see out his contract with German giants Bayern, which runs until June 2011.

"I have had an offer from Nigeria now, but I have rejected it," Van Gaal told German television channel Liga Total.

"It was not the first time I have received an offer from Nigeria, but I think that Bayern is a big challenge for me."

However, Van Gaal told German newspaper Frankfurter Allgemeine Zeitung that he would one day like to coach another national side.

"I think Bayern could be my final club. I would like to play a part in the World Cup, or similarly at a UEFA Euro tournament," he said. "I am looking forward to experiencing these tournaments."

The NFF announced last Friday that Amodu's third spell in charge had come to an end despite the 51-year-old leading the Super Eagles to the semifinals of the Africa Cup of Nations, where they lost to Ghana.

Amodu has been relegated to handling the "B" team ahead of the 2011 African Nations Championship.

The NFF said on its Web site that its list of candidates must be screened and whittled down to a final group of three by the end of February.

Hiddink's future as Russia coach is uncertain after the team failed to qualify for the World Cup in South Africa in June, and his contract runs out this year, but media reports suggest the Dutchman does not want the Nigeria job.

Frenchman Metsu is now head of Qatar's national team, but made his reputation by guiding Senegal to a shock win over champions France at the 2002 World Cup.

Djukovic took Ghana's Black Stars past the group stage of the 2006 World Cup but quit after a second-round defeat by Brazil, then had a two-year spell with China's under-23 Olympic team before taking charge of his native Serbia's under-21 side last July.

Taylor has been without a job since October when he was sacked by English third division team Wycombe.

He has had two separate spells with the England under-21 side, and was caretaker manager of the senior side for one match against Italy in 2000 when he gave David Beckham the captain's armband.

Meanwhile, Benin have sacked coach Michel Dussuyer after failing to progress past the first round of the Africa Cup of Nations in Angola last month, finishing third in Group C after a draw and two defeats.

The Frenchman's players and staff have also been dismissed by the Benin Football Federation.

"A decision has been made to dissolve the national team and its technical supervision," it said in a statement. "In the decision, taken by members of the executive committee, they took into account the indiscipline, lack of patriotism and lack of team results at the African Nations Cup.

"The federation, in conjunction with the sports ministry, will set up a new code of conduct and now start out on a new basis with all players who are called into the national team in the future."

Pre-tournament favorites the Ivory Coast, who surprisingly lost to Algeria in the quarterfinals, will play fellow World Cup qualifiers South Korea in a friendly in England on March 3.

The match will be played at the Loftus Road, ground of London club Queen's Park Rangers.