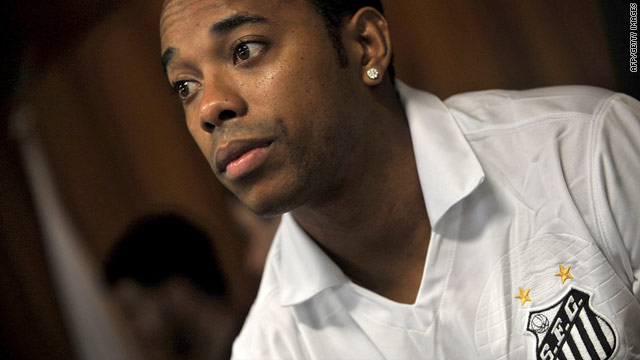 Robinho has made an immediate impact on his return to Santos, the club where he started his career.
STORY HIGHLIGHTS
RELATED TOPICS

(CNN) -- Manchester City misfit Robinho made a winning second debut for Santos as he scored the decisive goal in a 2-1 victory against Brazilian rivals Sao Paulo on Sunday.

The Brazil forward has returned home in a loan deal in order to boost his hopes of playing at the World Cup finals in South Africa in June, having struggled to win a first-team place with his English club this season.

The 26-year-old, who cost big-spending City a club-record $52.4 million when he agreed to leave Spanish giants Real Madrid in a shock deal right at the end of the August 2008 transfer window, started his career with Santos eight years ago.

He came off the bench 12 minutes into the second half at Sao Paulo's Morumbi ground, and netted the winner with just five minutes to play with a clever backheel at the near post from Wesley's cross.

The victory lifted Santos to the top of the Sao Paulo state Campeonato Paulista Championship above their opponents.

Teenage striker Neymar went to the top of the league's goalscoring charts after putting Santos ahead with a penalty seven minutes before halftime after Arouca was fouled by Miranda, his seventh strike this season.

Roger leveled the score 10 minutes after Robinho came on with a header from Marcelino Paraiba's cross, but the City star settled the outcome in the 85th minute as he caught out goalkeeper Rogerio Ceni with his improvised finish.