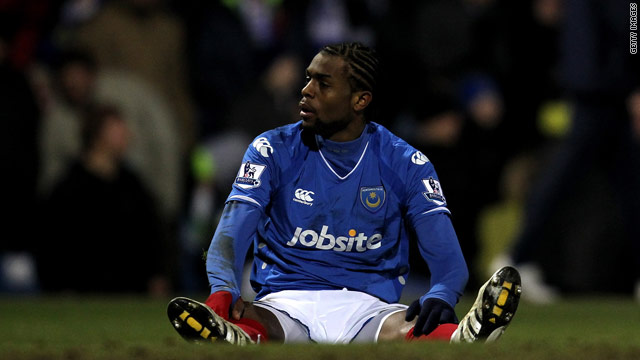 Portsmouth's battle for survival in the Premier League has switched from the pitch to the courtroom.
STORY HIGHLIGHTS

London, England (CNN) -- A leading English football club plying its trade in the world's richest league has moved a step closer to financial ruin, in a case which highlights the dire economic climate the "beautiful game" finds itself in.

Portsmouth, currently languishing at the bottom of the Premier League, faces an even greater battle off the pitch as it attempts to block a move by British tax authorities to have it placed in administration due to unpaid taxes.

Having failed to reach a settlement with Her Majesty's Revenue and Customs (HMRC) over an outstanding bill of £7.5 million ($11.76 million), the club was forced to go to court Wednesday to seek an adjournment of a hearing on a winding up petition presented by the HMRC.

With estimated debts of £60 million ($94 million) and four different owners over the past season, Portsmouth's precarious situation lends credence to recent comments made by another Premier League club chairman that investing in football makes "no commercial sense."

After taking control of West Ham in January, new owners David Gold and David Sullivan revealed that the club had debts of more than $160 million. They said the London club's problems stemmed from the ill-fated takeover in late 2006 by an Icelandic group, whose main backers were hit hard by their country's economic meltdown in 2008.

"We would not buy this club at all if this wasn't West Ham. It makes no commercial sense for anyone to buy this club, and it's amazing that two other people wanted to buy it," Sullivan said.

"We bought this as supporters, not from a business point of view. We will raise more money and, with other people, will dig the club out of the mess it is in."

"Football is too heavily dependent on the well-being of a small number of highly-paid individuals.
--Alan Sugar

However, the level of debt prompted Gold to this week to declare that the club's entire playing staff would have to take a pay cut in the summer.

Despite the millions pouring into the Premier League from broadcasting and commercial deals, co-owner David Sullivan pointed to a culture of irresponsible spending sparked by wealthier clubs such as Manchester City and Chelsea.

"They're bad for football. Maybe the ultimate solution is a wage cap," Sullivan told journalists. In the NFL, the salary cap is calculated by looking at the overall earnings of the league and then dividing that number between the individual teams to determine what they can spend that season.

Former Tottenham chairman Alan Sugar also criticized the "irresponsible manner" in which he thinks most football clubs' finances are run.

In an interview with BBC Radio, he said the game's business model was "flawed and vulnerable" and too heavily dependent on the well-being of a small number of highly-paid individuals.

"Cristiano Ronaldo was sold (for $125 million by Manchester United to Real Madrid). God forbid he got run over by the number 36 bus in Madrid -- he'd be worth nothing," he added. "That's how vulnerable football is."

United, regularly near the top of a wealth list compiled by accounting firm Deloitte, recently announced plans to raise $813 million through a bond issue to help refinance crippling debts accrued from the 2005 takeover of the club by the Glazer family.

A year ago, football's finances seemed to be healthier than ever, bucking the trend of global economic hardship.

The total value of the European transfer market had ballooned to a staggering $20.76 billion by the end of the 2007-8 season, and clubs -- especially in England -- splashed out big in the January 2009 transfer market, with the Premier League responsible for a record-breaking $252 million in player purchases.

"The economy of football is not an exception to the rule of economics.
--Jose Maria Gay de Liebena
RELATED TOPICS

Even given those rosy-looking figures of 2007-08, the most recent available, Europe's top clubs then still owed more than $6 billion according to a study by football finance expert Jose Maria Gay de Liébena, an accounting professor at the University of Barcelona.

"Clubs are getting deeper and deeper into the mire of enormous debt, and along with overvalued assets and costs that far outstrip income levels, this is the biggest of football's ills," Gay de Liébena said in his report.

With European ruling body UEFA planning to bring in new rules governing debt and ownership from 2012 which mean clubs cannot spend more than they earn, the pressure is on to find a safe financial footing.

Chelsea's billionaire owner Roman Abramovich responded by converting the $540 million he has given the English club in interest-free loans into equity.

Even Manchester City, owned by Abu Dhabi oil billionaire Sheikh Mansour bin Zayed Al Nahyan, have to keep an eye on their bottom line after figures released by the club revealed losses of almost $150 million. Sheikh Mansour has invested a staggering $630 million since buying the heavily indebted club in August 2008, the figures revealed.

And it's not just in England where clubs, also including the American-owned Liverpool, are battling to stay afloat in a sea of debt -- said to be around $4.3 billion for the whole of the Premier League, according to the Wall Street Journal.

"We are going to try to reduce the wages," the Bundesliga club's director of sport Christian Nerlinger said. "The wages have gone through the roof and, therefore, we have got to get our message through to the players that a new contract does not necessarily mean a pay rise."

Scottish clubs were last year forced to accept a far less lucrative replacement deal from Sky and ESPN following the collapse of Irish broadcaster Setanta, highlighting how precarious the existence of some leagues is.

"The economy of football is not an exception to the rule of economics," Gay de Liébena said. "If one major sponsorship or television deal collapses, the clubs will sink."