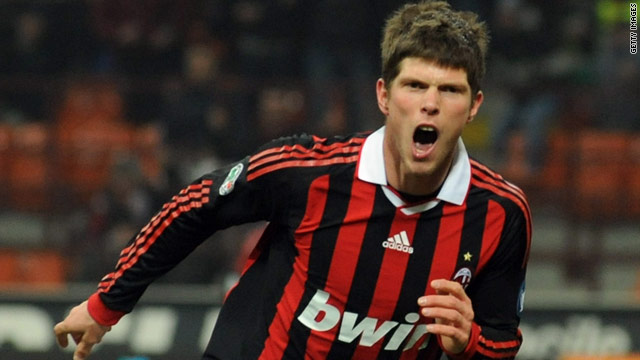 (CNN) -- A double from Klass-Jan Huntelaar saw AC Milan warm up for next week's Champions League clash with Manchester United by defeating Udinese 3-2 at the San Siro, a result that moves them up to second place in the Serie A table.

The home side took a seventh minute lead when Dutch international Huntelaar powered home a near post header from Ronaldinho's superb cross.

And in-form Ronaldinho, who has been surprisingly left out of Brazil's squad for next month's friendly international against the Republic of Ireland, also set up Alexandre Pato to tap in a second goal six minutes before half time.

However, the visitors pulled a goal back on the stroke of half time when Antonio Floro Flores headed home Antonio Di Natale's cross.

But man-of-the-match Ronaldinho helped restore Milan's two-goal advantage in the 57th minute when his free-kick was flicked on by Massimo Ambrosini, for Huntelaar to score from close range.

Di Natale made the last four minutes interesting when firing past goalkeeper Dida, after beating the Milan offside trap, but the home side held on to go above Roma in the table -- eight points behind city rivals Inter.

Meanwhile, in the Friday evening German Bundesliga match, Borussia Moenchengladbach beat Nuremberg 2-1 to move up to 11th place in the table.