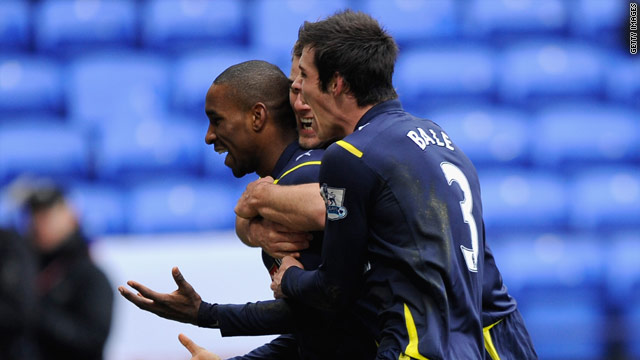 (CNN) -- FA Cup holders Chelsea could face big-spending Manchester City in the quarterfinals of this year's competition after Sunday's draw threw up the fascinating possibility.

Carlo Ancelotti's men cruised into the sixth round of the oldest domestic cup competition with a 4-1 home victory over second-flight Cardiff City on Saturday while City were held to a 1-1 home draw by Stoke City.

Another all-Premier League tie is in prospect after Fulham were paired at home with either Tottenham Hotspur or Bolton Wanderers.

Fulham had little trouble in ending the FA Cup dreams of fourth-division Notts County with a 4-0 home win on Sunday.

A full-strength Tottenham were behind to a Kevin Davies goal at the Reebok Stadium, but dominated the second half as Jermaine Defore equalized before Tom Huddlestone saw a penalty saved.

The two sides will replay White Hart Lane next week to decide who travels to Craven Cottage for the quarterfinal tie.

Championship clubs Reading and West Bromwich Albion, who drew 2-2 on Saturday at the the Madejski Stadium, have earned a home tie against the winners of the replay between Crystal Palace and Premier League Aston Villa, who also were tied at 2-2 on Sunday.

Second-flight Palace, who have gone into administration and face an uncertain future, were twice ahead against Martin O'Neill's men and looked to be headed for a shock victory.

But Villa won a disputed corner three minutes from time and Stilijan Petrov scored the equalizer to force a replay at Villa Park.

The other quarterfinal clash will be between crisis-hit Portsmouth, who are facing a winding up order in the English High Court and fellow Premier League side Birmingham City.

Portsmouth, the FA Cup winners in 2008 put their financial troubles behind them to beat south coast rivals Southampton 4-1, while in-form Birmingham beat Derby County 2-1, both games on Saturday.

The ties will be played on the weekend of the 6th and 7th of March.