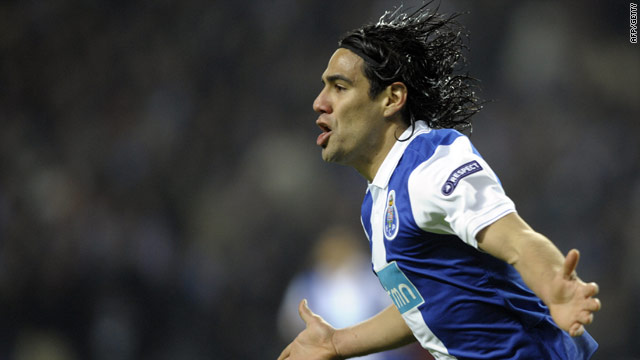 (CNN) -- Polish goalkeeper Lukasz Fabianski made two sorry blunders as Arsenal crashed to a 2-1 defeat in their Champions League last 16 clash against Porto at Estadio do Dragao.

Fabianski, standing in for the injured Manuel Almunia saw a soft shot go past him for Porto's opener.

Comeback defender Sol Campbell quickly leveled for Arsenal but it was his back-pass which was picked up by Fabianski to concede a free kick which led to Porto's winner in the second half.

In an open game, Arsenal were quickly level as Thomas Vermaelen and then Tomas Rosicky worked a Samir Nasri corner to Campbell who headed home from close range on 16 minutes.

It was Campbell's first goal for Arsenal since the 2006 Champions League final.

Fabianski mixed brilliance with his mistakes as he did well to keep out a fine shot from Micael on 29 minutes.

Arsenal thought they should have had a penalty when Tomas Rosicky was pulled down, but soon afterwards they found themselves behind again.

Hesitancy between Campbell and Fabianski led to the keeper picking up the ball just inside the penalty area.

With Campbell still debating the decision, claiming it was not a deliberate back-pass, Porto took the free-kick immediately - which Micael quickly tapped to Falcao for the Colombian to roll the ball into an empty net.

Porto pressed hard for a third ahead of the second leg in London but Arsenal held out to limit their losses.

"I believe it (the back-pass) was accidental, Sol touched it accidentally," Wenger told ITV1. "And the referee should give us time to build the wall."

It was a massive mistake. I believe it was accidental. Sol touched it by accident
--Arsene Wenger

In the other last 16 clash on Wednesday, Bayern Munich clinched a 2-1 win over 10-man Fiorentina in the Allianz Arena.

Arjen Robben put the Bundesliga side ahead with a penalty just before halftime, but Per Kroldrup gave the Italian visitors a deserved equalizer five minutes into the second half.

Referee Tom Henning Ovrebro, who took charge of the controversial semifinal between champions Barcelona and Chelsea last season, was in the spotlight again as he controversially sent off Fiorentina's Massimo Gobbi for an apparently innocuous tackle.

Miroslav Klose, who many deemed fortunate to stay on the field for a more robust challenge, then headed home a late Bayern winner with Fiorentina claiming he was offside.