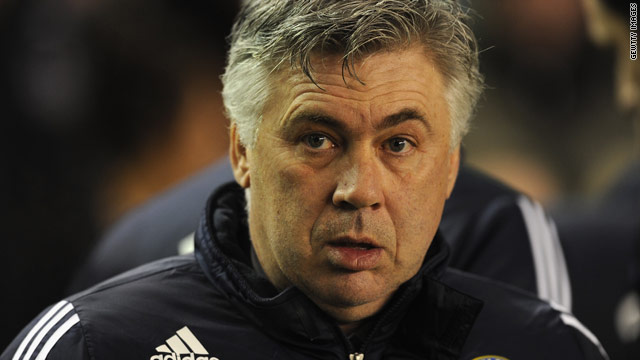 Ancelotti has held a face to face meeting with his players to warn about their behavior.
STORY HIGHLIGHTS
RELATED TOPICS

(CNN) -- Chelsea manager Carlo Ancelotti has issued a stark warning to his players that unseemly behavior off the pitch will be punished.

Ancelotti and the club's chief executive Ron Gourlay had a short meeting with the first team squad earlier this week where the consequences of bad behavior was spelt out.

The Italian coach is anxious to avoid the unsavory headlines which engulfed his captain John Terry and have also seen fellow England star Ashley Cole making news for non-footballing reasons.

Ancelotti told his weekly press conference on Friday that the guidelines had been laid out.

"Now they know very well what they have to do and what behavior is expected of them when they're in the Chelsea shirt," he said.

"We are interested, me and the club, in protecting the image of this club. Not only the players and the manager, all the staff -- the people who work in this club -- have to protect that image.

"That is one of the most important things, the image of the club. We want to carry that forward. And I think the players and all the staff know very well what they have to do."

Chelsea have seen their lead at the top of the English Premier League cut to a single point by Manchester United and travel to Wolves on Saturday without England midfielder Frank Lampard (virus) and Brazilian defender Alex (knee injury).

But Terry, who was given a break from the FA Cup win over Cardiff to spend time with his wife Toni after revelations of an alleged affair with the ex-girlfriend of former teammate Wayne Bridge, is back in the squad.

"John Terry has returned and trained very well this week," said Ancelotti, who has publicly backed his captain through the controversy.