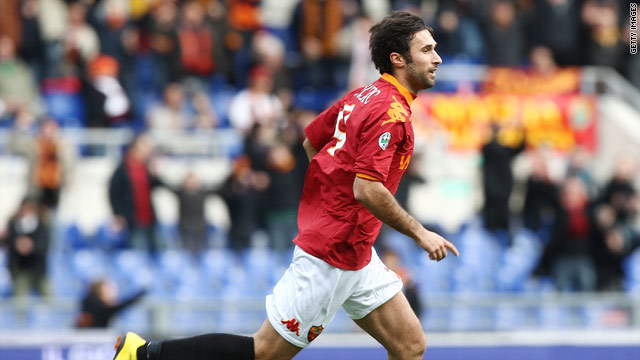 Mirko Vucinic wheels away after scoring the only goal of the game in the Stadio Olimpico.
STORY HIGHLIGHTS
RELATED TOPICS

(CNN) -- AS Roma's Serie A title challenge gathered further momentum on Sunday as they beat Catania 1-0 in the Stadio Olimpico on Sunday to cut the gap on leaders Inter Milan to five points.

Inter's great city rivals also stayed in the title hunt in third with a 2-0 win at Bari later on Sunday and are two points further adrift.

Milan scored the opener just before the break as Ronaldinho floated a ball for Marco Borriello to score with a spectacular volley.

The clincher came after the break as Ronaldinho set up his fellow Brazilian star Pato to score on 69 minutes.

Earlier, Mirko Vucinic scored the only goal of the game as Roma extended their unbeaten run to 15 games and have won seven in a row in the league.

With champions Inter stuttering to a goalless draw at home to Sampdoria on Saturday with Walter Samuel and Ivan Cordoba both sent off, Roma took full advantage.

Roma made a slow start to the season under Claudio Ranieri with only three wins from their first 10 games, but they have emerged as the leading challengers to Inter in recent weeks.

Roma lost 3-2 to Panathanaikos in midweek in the Europa League but returned to winning ways as Montenegro star Vucinic scored on 18 minutes from close range after a corner.

Juventus maintained their mini-revival as they followed a fine 2-1 Europa League win at Ajax with a 2-1 success at Bologna.

It moved them back into the Champions Leaque qualification spots in fourth and came courtesy of a fast start as Diego scored after just four minutes.

Bologna pressed in search of an equalizer and were rewarded when Antonio Busce converted from a corner after 50 minutes.

But against the run of play, Alessandro Del Piero played in substitute Antonio Candreva to score the winner.

Juve's win took them above Napoli, who lost fourth place after a drab goalless draw at bottom side Siena.