Brazil star Ronaldo to retire in 2011 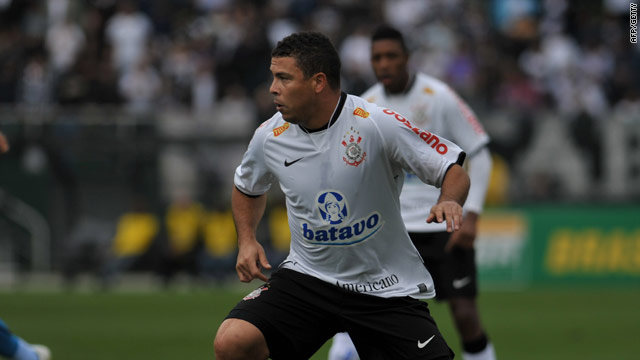 Ronaldo has been plying his trade with Corinthians and has regained his scoring touch.
STORY HIGHLIGHTS
RELATED TOPICS

(CNN) -- Brazilian World Cup hero Ronaldo says he is to retire from football at the end of next year.

Ronaldo, who was a member of the Brazil squad which won the 1994 World Cup and scored twice in the final in 2002 as they beat Germany, has been playing for Corinthians in his native country.

The 33-year-old told the club's official Web site www.corinthians.com that he would see out his two-year contract which ends in 2011 before hanging up his boots.

"I renewed for two more years and those will be the last ones," he said after morning training on Monday.

Ronaldo has enjoyed a glittering international career with Brazil, scoring 62 goals in 97 appearances, setting a new World Cup record with his 15th in the 2006 finals where they were knocked out in the quarterfinals.

Despite his advancing years and with a string of injuries behind him, Ronaldo still holds out hopes of taking part in this year's finals in South Africa but admitted he faces a tough task in persuading Brazil coach Dunga to pick him.

"It's a thing that can still happen to me," he believes.

But for now he has targeted South America's Libertadores Cup, having already helped Corinthians to the Paulista Championship in Brazil, scoring 12 goals in 20 appearances to show he still retains his scoring touch.

"I am determined. I want to give my best, have fun and I hope to finish by winning the Libertadores," he said.

When he finally retires, Ronaldo will be remembered as one of the greatest footballers of all time, with a scoring rate of approaching a goal a game while plying his trade with top European club sides PSV Eindhoven, Barcelona, Real Madrid and both Internazionale and AC Milan.

He is a three-time FIFA World Footballer of the Year.

Ronaldo began his career in Brazil with Cruzeiro and returned to turn out for Corinthians after another serious knee injury while playing for Milan appeared to signal his playing days were over.

But he has defied his critics, and after initially training with Flamengo, settled on the Corinthians and is set to act as an ambassador at the Parque San Jorge after he quits.