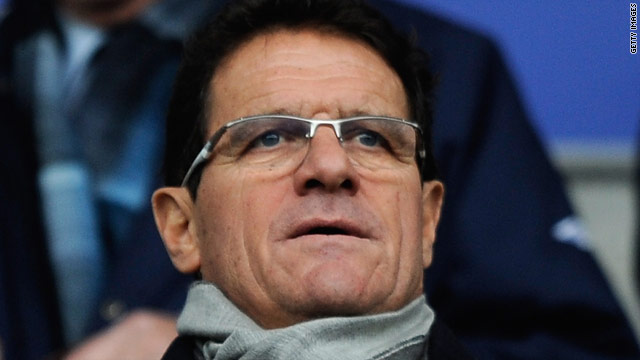 Fabio Capello says he and his players have a lot to talk about ahead of the World Cup warm-up against Egypt.
STORY HIGHLIGHTS

(CNN) -- England coach Fabio Capello has warned his players to behave or face the risk of missing out on a trip to the World Cup finals.

John Terry has already been stripped of the captaincy following tabloid allegations of his marital infidelity with the former partner of ex-Chelsea teammate Wayne Bridge.

And another Chelsea player, Ashley Cole, has been at the eye of a media storm which culminated in his pop star wife Cheryl announcing on Tuesday that she is separating from him.

Capello, known as a strict disciplinarian, is expected to lay down the law to his squad ahead of next Wednesday's friendly with Egypt in London as he bids to fortify team morale for football's showpiece event in South Africa, which starts in June.

"The players have to understand what I want, if you want to stay with me," the Italian told reporters on Tuesday. "It will be very important because we need to create a group. The England shirt is very important. This will be one of the most important points we will speak about.

"The World Cup is really important for me, for England and for the players. We have to stay together and compact in every moment. I think this will be my most important job, to recreate this spirit.

The players have to understand what I want, if you want to stay with me. We need to create a group
--Fabio Capello
RELATED TOPICS

"After four months, we will meet the players next week and it will be a very important game for many reasons. One is also this [situation].

"We will talk about a lot of things because four months is a long time. If you can meet the players every month it is different. We will have two days to stay together, but they are very strong days."

Terry is expected to be named in the squad to face the Africa Cup of Nations champions at Wembley next week, but Cole is out with a broken ankle so Manchester City defender Bridge is poised to deputize at left-back.

"We hope he will be fit in two months more or less, and I think he will be ready for the World Cup," the 63-year-old said.

Meanwhile, Jose Mourinho has claimed that he turned down the chance to become England's manager just before Capello was appointed in December 2007.

The Portuguese coach told reporters ahead of Inter Milan's Champions League clash with his former club Chelsea on Wednesday night that the England role "was not the job for me" when he was asked to replace the sacked Steve McClaren.

"I could have been England manager. I was, at that time, maybe the proudest manager in the world because, especially for a foreign coach, to have the possibility of leading a country like England, I was the proudest man in the world," he said on Tuesday evening.

"It was not the job for me and I decided it was not to be. It was a good decision, England chose a very good experienced manager who is doing a great job.

"And, because I love England, I hope he keeps doing very, very well and keeps having the dream and, why not, the reality of making something very, very important for your country."