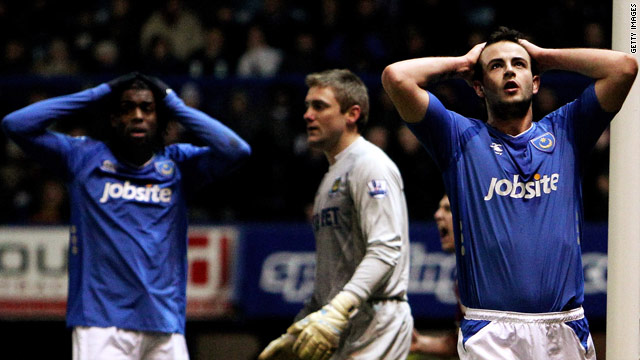 Portsmouth are already bottom of the Premier League and now face a nine-point penalty.
STORY HIGHLIGHTS

London, England (CNN) -- The future of English Premier League club Portsmouth was in doubt Friday after it was forced to go into administration with debts of around $90 million.

The south coast side are the first Premier League side to call in administrators since the division was formed 18 years ago, fueling a financial boom in English football on the back of lucrative TV rights.

"At 10:20am today Portsmouth Football Club was placed into administration following the filing of a notice of appointment at the High Court by the chargeholder, Portpin Limited," the club said in a statement on its Web site.

Explainer: What next for Portsmouth?

Being placed in administration means an insolvent company is run by a court-appointed administrator with a view to saving it from liquidation. The administrator will assess the assets held by the company and attempt to reach agreement with creditors.

Portsmouth, managed by former Chelsea boss Avram Grant, are already bottom of the table and facing relegation after raising around $100 million in player sales before the current season in a bid to reduce their debts.

They will now be docked a further nine points, virtually sealing their relegation to English football's second tier at the end of the season.

Video: 'We will save your club'

The club has passed through a succession of owners this season but efforts to find a fifth broke down Tuesday when present owner Balram Chainrai confirmed the club would opt for administration to avert a winding up order from the UK government.

At a press conference on Friday the club's administrator, Andrew Andronikou, confirmed that Portsmouth's debts were around $100 million, but he said he was confident they would not go bust.

He also said the Premier League had indicated that Portsmouth may be permitted to sell players outside the transfer window. "There will be no firesale. We will have to sell one or two players and that is why we are talking to the Premier League," he said.

"The restructuring starts today and there will be significant cost cutting at all levels. I will be cutting to the bone."

Andronikou also confirmed that Grant had vowed to stay at the club until the end of the season.

Portsmouth's Chief Executive Peter Storrie said it was an "extremely sad day" but admitted going into administration had "kept the club alive and given someone an exceptional opportunity to take this great club on with fresh investment."

He also confirmed his intention to step down when a new buyer for the club had been found.

Portsmouth's financial collapse completes a remarkable fall from grace for a side which won the FA Cup in 2008, the club's first major honor since winning back-to-back English league titles in 1949 and 1950.

Portsmouth are not the first football club to run into financial problems as a consequence of debts wracked up in pursuit of success on the field.

Leeds United went into administration in 2007, three years after their relegation from the Premier League and six years after the club had reached the semifinals of the Champions League.

Leicester City and Portsmouth's south coast rivals Southampton also went into administration after losing their places in the top division.