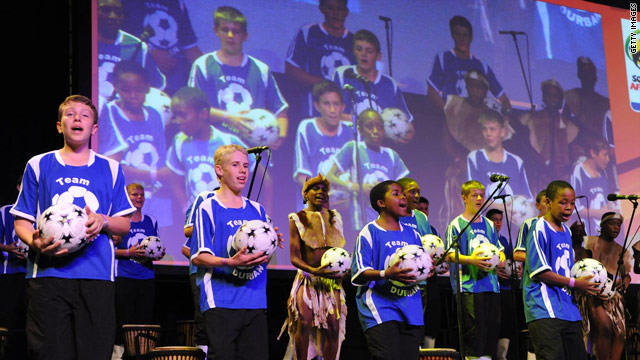 Members of the Drakensberg Boys' Choir perform at the 100 Day Banquet in Durban.
STORY HIGHLIGHTS

(CNN) -- With only 100 days before the kick-off of the first World Cup to be staged in Africa, the host country's officials are confident that the footballing showpiece will be a success.

South Africa's Deputy President Kgalema Motlanthe told guests at a 100 Day Banquet in Durban to begin the countdown that his nation is ready to welcome the 32 competing teams and their supporters.

"As we mark 100 days to the start of the 2010 FIFA World Cup, we do so with immense pride," Motlanthe said in a speech quoted on FIFA's Web site on Tuesday.

"We are proud because, in many respects, we are able to pronounce ourselves ready to welcome the world three months ahead of schedule.

"We have gathered here to begin a countdown to the greatest football tournament on earth.

"On behalf of the Republic of South Africa, I wish to extend our gratitude to all the men and women who have worked on the World Cup project and those who are still working on the last phase of our preparations."

When the tournament was handed to South Africa in 2004, many critics expressed doubts that sufficient infrastructure would be put in place to make such a huge undertaking possible.

FIFA was quick to deny rumors that there was a back-up plan should South Africa not be ready for 2010, but a strike by construction workers in 2009 over pay led to more fears that the stadia would not be completed in time for this year's June 11 kick-off.

However, the chairman of the 2010 FIFA World Cup Organizing Committee South Africa, Dr Irvin Khoza, said that the tournament was now almost a reality.

"When the countdown started there were 2,218 days -- we did not count in years and months. But when you arrive at 100 days it is the last three-digit number on the countdown," he said on FIFA's Web site.

"It is within this time period when people start applying for their leave, plan for their travel and even pay. People no longer say they are going to South Africa. They say 'I am flying to Durban, on this airline and staying in this hotel.'

"Today, 100 days before the opening match, I ask you to recall the words of US President, Barack Obama. Can we stage an outstanding World Cup in Africa? Yes we can, we are waiting and we are ready."