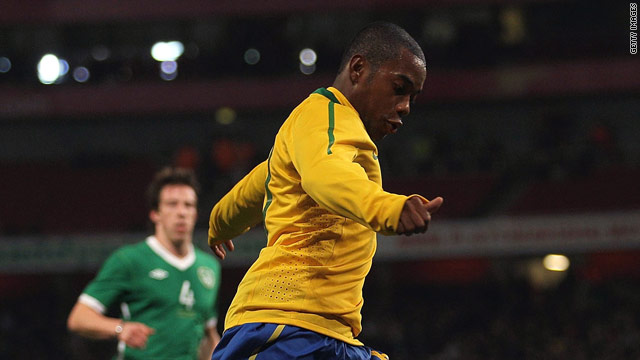 Robinho prepares to cross before Keith Andrews scored an own goal to put Brazil ahead at the Emirates.
STORY HIGHLIGHTS
RELATED TOPICS

(CNN) -- Brazil warmed up for their World Cup campaign with a 2-0 win over the Republic of Ireland in a friendly at the Emirates Stadium in London on Tuesday night.

Manchester City's Robinho, who has been loaned out to Brazilian club side Santos, was involved in both goals.

His cross just before halftime led to Keith Andrews putting the ball past Shay Given for an own goal to give Brazil the lead.

After the break Robinho grabbed a deserved second goal in the 76th minute and further might have followed as the Brazilians turned on the style against a tiring Irish side.

It was the first match for Giovanni Trapattoni's men since Thierry Henry's infamous handball which saw France win their playoff match for a place in the World Cup finals.

Dunga's Brazil are completing their final preparations for South Africa and showed that they will be formidable opponents in the global showpiece.

Ireland, with captain Robbie Keane taking his place after an injury scare, made a bright start and the on-loan striker made an early impression as his low shot was blocked.

The Irish might also have scored as Kevin Doyle's close-range header was pushed away by Julio Cesar.

Brazil took the lead a minute before the break as Robinho sent a low pass back across goal and Andrews deflected past Given, who was making a record 103rd appearance for the Republic.

Brazil were the more dangerous after the break, with Real Madrid's Kaka a constant threat, but it was substitute Daniel Alves who went closest as his robbed Sean St Ledger and after rounding Given stabbed his shot wide.

Robinho wasted a chance as he blazed over but scored a clinical second after more good work from Kaka and a clever one-two with Grafite before beating Given.