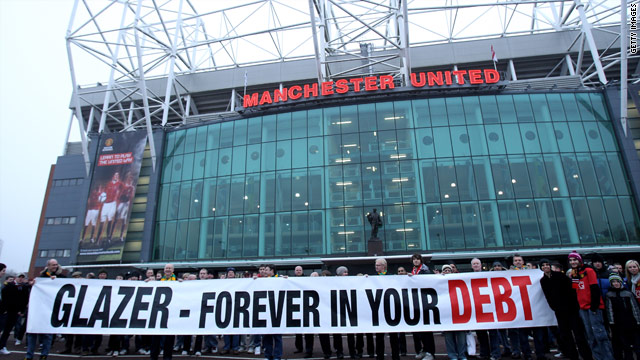 Public protests have been launched against the Glazer family by supporters' groups.
STORY HIGHLIGHTS

The self-styled "Red Knights" issued a statement on Tuesday to confirm that they had held talks about ousting the current American owners, the Glazer family, to assume control at Old Trafford.

The Red Knights include Jim O'Neill, the chief economist at Goldman Sachs, who is reportedly a friend of Manchester United manager Alex Ferguson.

"We can confirm that a group of high net worth individuals, who support Manchester United met in London yesterday," a statement released on behalf of the Red Knights read.

"This group is supportive of current management but are looking at the feasibility of putting together a proposal to be put to the Glazer family regarding the ownership of Manchester United.

"These discussions are in early stages and no contact has been made with the Glazer family."

The Red Knights are joining forces with the influential Manchester United Supporters Trust (MUST), who have mounted a vociferous campaign against the Glazers over their debt leveraged buyout of the club and fears about its future viability.

The current level of debt stands at $1,089 million and the Glazers recently launched a bond issue to raise $750 million to reduce the debt.

Football floats on a sea of debt

"As a first step, the Red Knights want supporters to demonstrate their commitment by joining the free online membership of the Supporters Trust, www.joinmust.org," the statement went on.

We can confirm that a group of high net worth individuals, who support Manchester United met in London yesterday
--Statement issued by Red Knights

"Any new ownership model would aim not only to put the club on a sound financial footing, but would also aim to put the supporters at the heart of everything the club does."

In recent weeks a groundswell of opinion has built up against the Glazers, who are rarely seen in public but did attend the English League Cup final at Wembley on Sunday as Manchester United beat Aston Villa 2-1.

They would have seen a large body of fans donning the original green and gold shirts of United's founding club Newton Heath, one of the trademarks of the Supporters Trust campaign.

Oliver Houston, a vice-chairman of MUST, told CNN World Sport that the Red Knights had their unequivocal backing and that his group had been involved in a series of meetings with them.

"These guys are Manchester United supporters to the core and they are talking about putting in their own money in any possible bid," he said.

Houston admitted that the Red Knights are at the "early stages" but had appointed a team of lawyers and advisers to bolster their activities.

"We are talking about the long term health and sustainability of Manchester United," he added.

But the Red Knights will need to raise at least $1.52 billion to launch a buyout of the most successful club in the English Premier League, Drew Barrand from Sport Industry Group told World Sport.

The Glazers reacted quickly to news of the putative bid.

"Manchester United is not for sale," said a spokesman for the family, who also own the NFL side Tampa Bay Buccaneers.

The statement of intent by the Red Knights comes on the day that the latest football "rich list", compiled by Deloitte, found that Manchester United had slipped to third place behind Spanish giants Real Madrid and Barcelona.

The list excludes transfer fees and is based on turnover and income and United's slippage to third can, in part, be explained by the fall of the English pound against the euro.

Real and Barcelona also benefit from negotiating their own television rights package while United are tied into the collective deal put in place by the English Premier League, but the statistics could give added justification for a takeover bid.