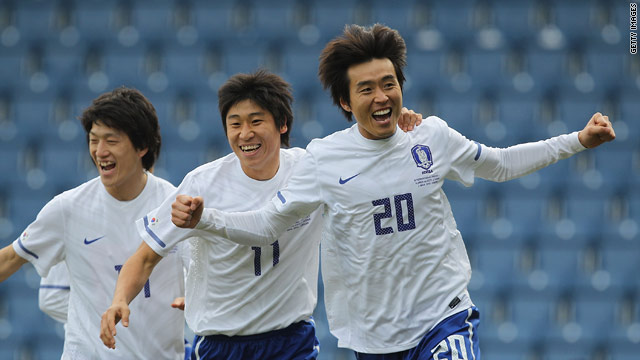 Lee Dong-gook's early strike put the Koreans on their way to victory which was sealed by Kwak Tae-hwi's late header.

Both teams had several English Premier League stars in their ranks, with Korea captained by Manchester United's Park Ji-sung while the Ivorians had Chelsea's Didier Drogba and Portsmouth's Aruna Dindane in attack and Arsenal's Emmanuel Eboue in defense.

Drogba came close several times for the Elephants, who crashed out in the quarterfinals of the Africa Cup of Nations to Algeria, and are without a coach after the subsequent sacking of Vahid Halihodzic.

The Ivory Coast have been linked with former Chelsea and Russia boss Guus Hiddink and need to show an improvement with Brazil and Portugal in a tough group in South Africa.

It was the Koreans who gave their rowdy supporters at the home of second flight English side Queens Park Rangers the most to cheer and they were ahead in the fourth minute.

A free-kick from Cha Du-ri was only partially cleared and Dong-gook showed superb technique by volleying it past Boubacar Barry.

Park nearly gave the Koreans a two-goal cushion but he was denied by an excellent block by Souleman Bamba.

United ace Park also saw a shot drift just wide after the break, but in the dying moments they grabbed a deserved second as Kwak headed in Kim Jae-sung's free-kick.

It proved a generally round of friendlies for Africa's World Cup qualifiers with Algeria, who are in England's group, thrashed 3-0 at home by Serbia, who are also in the finals.

Ghana were beaten 2-1 by Bosnia despite going ahead through Sulley Muntari after 22 minutes but the Super Eagles of Nigeria beat the DR Congo 5-2 as they build up to the finals.

Cameroon also received a boost as they held world champions Italy goalless in a later match held in Monte Carlo.

Marcelo Lippi fielded an experimental Italian side but they had the better chances although it needed a last-ditch tackle from substitute Gennaro Gattuso to deny Samuel Eto'o a late winner for Cameroon.