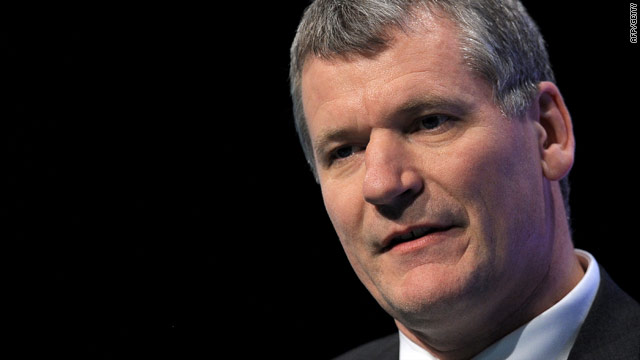 Gill dismissed talk of a takeover at Old Trafford by the Red Knights.
STORY HIGHLIGHTS

(CNN) -- Manchester United chief executive David Gill has dismissed talk of a takeover at Old Trafford by a group of wealthy businessman who have called themselves the Red Knights.

Gill told the Soccerex conference in Manchester on Wednesday that the current owners the Glazers had no intention of selling and also questioned the credentials of some of the leading figures in the Red Knights consortium.

"The owners are very long-term owners and have shown that with Tampa Bay (NFL team), which they took over in 1994-5," he said.

"They are not sellers, (but) that's not saying people like these Red Knights can't come forward with some ideas.

"But there is no indication to mean that they want to sell and in that case they cannot buy the asset, it's not for sale."

The Red Knights group has teamed up with the Manchester United Supporters Trust (MUST) to prepare a bid for the English Premier League champions.

They are concerned by the debt-leveraged buyout of United by the Glazers, with the most recent accounts for United's parent company, Red Football Joint Venture, showing that it had debts of $1.08 billion dollars.

The fans fear that the cost of servicing the debt has tied the hands of manager Alex Ferguson in the transfer market, despite the world record fee of $120 million paid by Real Madrid for Cristiano Ronaldo.

Gill insisted that Ferguson has the money available, but was biding his time.

"We are looking at players all the time, the money from Ronaldo is sitting there in the bank account, we have been clear on that.

"But Alex has been very clear he is not going out to chase and over-pay for a player just because everyone else thinks we should.

"He's a Scot, he wants value for money," Gill quipped.

The MUST campaign, given added impetus by the ambitions of the Red Knights, is calling on supporters to join their online group and to don the green and gold colors of United founding club Newton Heath.

MUST claimed Wednesday that it had added another 20,000 members since news of a possible takeover bid emerged earlier this week.

But again Gill insisted that they were a small minority of the United fan base.

"We have 330 million followers around the world, that's a key strength and within that it's highly likely you will have some dissenters

"The vast majority of fans of Manchester United should be happy with what we are doing and staying at the top of domestic and world football."

Gill also doubted the management model flagged up by the Red Knights although the group was at pains on Tuesday to stress that both he and manager Alex Ferguson would remain in their jobs.

There is no indication to mean that they (the Glazers) want to sell and in that case they cannot buy the asset, it's not for sale
--Manchester United chief executive David Gill

"The Red Knights proposal, the idea of having 20, 30 or 40 very wealthy people running Manchester United, I don't know how it would work in practice.

"The better-run clubs are where there is clear, single decision-making and it's quick and efficient -- Roman Abramovich at Chelsea, Sheikh Mansour at Manchester City, Silvio Berlusconi at AC Milan.

"Having a number of wealthy people involved, they will all want to be involved in decision-making.

"I'm not sure what their endgame is but the endgame is irrelevant," he concluded.

The Red Knights include Jim O'Neill, the chief economist at Goldman Sachs, and a number of other "high-net worth individuals" who are experts in the debt market.

They will need to raise at least $1.52 billion to launch a buyout of the most successful club in the English Premier League, Drew Barrand from Sport Industry Group told CNN World Sport on Tuesday.