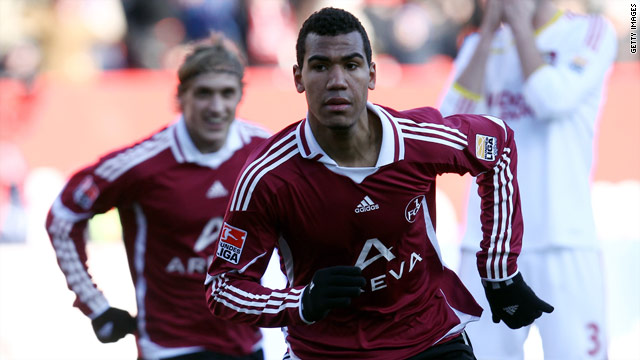 (CNN) -- Bayer Leverkusen saw their record unbeaten run come to an end with a 3-2 defeat at struggling Nuremberg which dents their Bundesliga title hopes.

Leverkusen had gone into Sunday's match with a 24-game unbeaten streak and looking to draw level on points with Bayern Munich at the top.

But the home side dominated and took a 3-0 lead with striker Eric Maxim Choupo-Moting scoring twice before a belated fightback by Leverkusen.

The defeat leaves them three points adrift of Bayern, who were held 1-1 at Cologne on Saturday, while Nuremberg move out of the relegation zone into 15th with their best victory of the season.

The 20-year-old Choupo-Moting demonstrated his ability by beating German international goalkeeper Rene Adler with a 42nd minute strike and then held off two defenders to score his second just before the break.

Senegal midfielder Mickael Tavares put Nuremberg three up on the hour mark before a late rally by the visitors.

But Nuremberg held on to secure a vital victory which greatly helps Bayern and the other German title chasers FC Schalke.

In Sunday's other game, Mainz scored a 1-0 away win at Hoffenheim.

In the Scottish Premier League, Celtic cut the gap on runaway leaders Rangers to 10 points with a 2-0 win at Falkirk, with on-loan striker Robbie Keane scoring both goals.