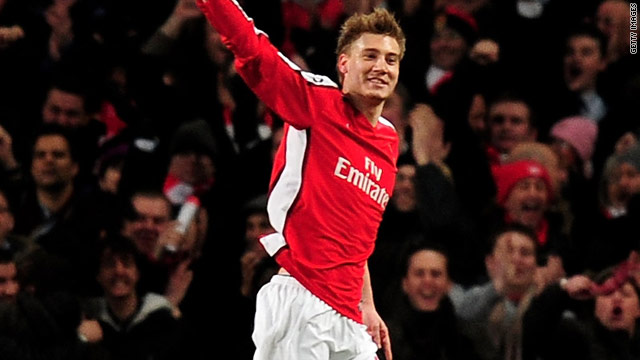 (CNN) -- Nicklas Bendtner scored a hat-trick as a rampant Arsenal side thrashed Porto 5-0 at The Emirates to reach the quarterfinals of the Champions League on Tuesday.

Danish international Bendtner had been widely criticized for missing a host of chances in Arsenal's 3-1 Premier League win over Burnley on Saturday -- however, he was in the right place at the right time twice in the first-half as the Londonders comfortably overturned their 2-1 first leg deficit.

The opening goal came in the 10th minute when Bendtner was on hand to fire into an empty net after goalkeeper Helton had rushed out to block the on-coming Andrey Arshavin.

And he doubled the lead 15 minutes later after more good work from Russian Arshavin, who evaded two challenges on the edge of the area before crossing for the striker to comfortably slot home.

It's never perfect but it was a good performance, a strong performance.
--Arsene Wenger

Porto came out with more determination after the break but were hit by two goals in the space of three minutes around the hour mark.

First, Frenchman Samir Nasir produced a moment of breathtaking skill and fast foot-work to dance around three Porto challenges before firing past Helton from an acute angle.

Then, with their Portuguese opponents chasing the game, Arshavin collected the ball on the break after a Porto corner was cleared.

He had Emmanuel Eboue overlapping in support -- and the pass was perfect for the Ivorian to round the goalkeeper before stroking the ball home.

And a superb night for Arsenal -- and Bendtner in particular -- was completed in the final minute when Eboue was fouled in the penalty area, and the Dane stepped up to fire his penalty wide of Helton's despairing dive.

Arsenal manager Arsene Wenger told Sky Sports: "It's never perfect but it was a very good performance, a strong performance.

"We had a very good first half, suffered a bit at the beginning of the second half, but Nasri's goal made a big difference and from then it was easy."

Meanwhile, Bayern Munich are also through to the last eight, progressing on the away goals rule despite losing 3-2 at Fiorentina.

Their qualification was sealed with a stunning strike from Dutchman Arjen Robben, who skipped past a couple of challenges before firing home a thunderbolt shot from a full 30 meters out.

The Serie A side took a 28th-minute lead when Juan Vargas netted from a tight angle after a week clearance from goalkeeper Jorg Butt.

And the hosts doubled their advantage nine minutes after the break when Stevan Jovetic scored from close range after a superb Alberto Gilardino backheel.

Bayern made the scores level 3-3 on aggregate on the hour mark when Mark Van Bommel drilled home a low shot after good work from Frank Ribery.

That sparked wild celebrations from the home bench and supporters, but just 72 seconds later Robben unleashed his devastating strike to break Florence hearts and complete a crazy spell of four goals in 12 minutes.